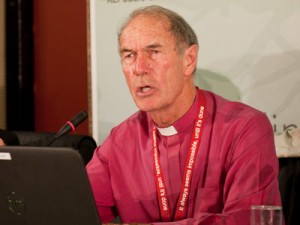 Rich countries’ behaviour at COP17 can be compared to apartheid, according to South African Bishop Geoff Davis.

Davis – who has spoken out throughout the conference in Durban – said wealthy countries were trying to keep power and wealth for themselves and urged decision makers to put the needs of people and the planet before profit.

Speaking at the Climate Action Network International daily press conference he said: “We need to put the well-being of the planet and people before self-interested, financial considerations. We are being driven by almost evil forces that care just about profit.

“Here we are on South African soil where apartheid was defeated. Yet we are seeing a global apartheid. Rich countries are keeping wealth and power for themselves.”

Davis who runs the Southern African Faith Communities Environment Institute has been a key figure over the last two weeks. He was heavily involved in the faith rally that preceeded the conference last Sunday (27 Nov) and spoke to the crowds as they gathered for the climate justice march on Saturday (3 Dec).

He also said climate change is a moral issue and it must be met with moral principles and said that allowing global warming to exceed 2˚C would be immoral and could be catastrophic.

“Here in Africa we are concerned. Scientists say African temperatures will increase twice as much as the global average. It is immoral for nations to say we will continue to emit carbon until we hit 2˚C. We worship a creator God and we are in the process of destroying that creation.”

Christian Aid welcomed the latest call by Bishop Davis saying that with the climate talks having made less progress so far than many would have hoped for, it is important to have new ways of thinking about the crisis facing the world.

Speaking at the same conference Tim Gore from Oxfam International said that NGOs have given a clear message to the US to step aside so now it is time to call on other countries including the EU to step up.

He called on the EU to be at forefront of a new agreement under Kyoto saying: “There can be no question of putting some sort of weak political declaration forward and thinking that’s sufficient, it’s not.

‘We need a new Kyoto Protocol, ratifiable, with a commitment period of five years and with all the loop holes closed, with new targets attached.

“So we need the EU to set that and give the clearest possible message that that is what they are working
towards.”