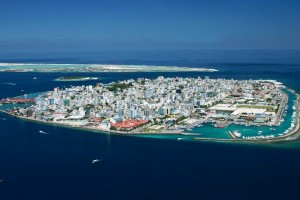 Male, the capital of the Maldives, and its seawall. (Source: Shahee Ilyas)

Action must be taken immediately to avoid “climate genocide”, according to several low-lying island states at COP17.

Addressing ministers and heads of states for the first time this morning, parties representing at risk islands used the opportunity to issue dire warnings.

“We wanted a legally binding deal to guarantee our survival. It’s the only viable solutions,” said Mohamed Aslam, Minister of Housing and Environment, Maldives.

“Current pledges are not concurrent with what parties agreed in Cancun. These pledges have us on a path to four degrees of warming. This will definitely wipe my country and many other islands off the map. It’s time to act decisively,” he said.

Aslam also appealed for cuts in bureaucracy to speed up the process.

“We cannot accept once again to redefine what we have already concluded. Redefining and reinventing building blocks will only delay the progress we have achieved so far [sic]. Some people think time is on their side. For my country it is extremely important to get action today,” said Aslam.

Fouad Mohadji, Vice President of Comoros said that millions of people were living with a death sentence over their heads adding that without sufficient action now from his fellow delegates: “History will condemn us for causing climate genocide.”

The Marshall Islands’ Minister in assistance to the President, Ruben Zackhras reiterated this point saying that the future of his country was in jeopardy, and that sooner or later it will become of interest to the International Court of Justice.

The low lying islands are keen for a second commitment period of the Kyoto Protocol to be agreed in Durban and for negotiations on a broader long term deal on emissions cuts to begin immediately.