EU says US “ping-pong” blame game with China must stop 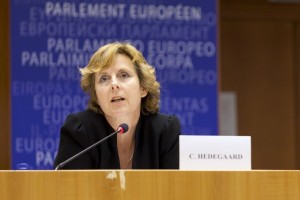 The EU called for the US and China to stop their “ping-pong” blame game and clarify their positions on a global deal, during a press conference on Wednesday.

The EU has backed a second commitment period of Kyoto but wants assurances that are other major emitters are willing to commit in the future. The US, which did not ratify Kyoto has said it will not consider a new global deal until major emerging economies, including China, sign-up as well.

The US was also branded “ignorant and arrogant” by Jo Leinen, chairman of the European Parliament delegation at COP17, for passing a bill to forbid US airlines from taking part in the EU Emissions Trading Scheme (ETS).

Leinen said they were arrogant for not respecting EU legislation and ignorant for not appreciating the value of the ETS.

The EU will include aviation in its ETS as of January 1 2012. All flights landing or taking off within the EU will be included, regardless of the nationality of the airline, the final destination or the origin of the flight.

On Tuesday, the BASIC group of countries described the EU move as a “trade action, hidden in the guise of climate”.