VIDEO: Huhne and Figueres vent frustration with US position at COP17

The head of the UNFCCC and the UK energy and climate change minister expressed their deep frustration with the US negotiating position on Monday.

In a rare outburst of criticism, Christiana Figueres described the US situation as “sad” and said she hoped things would improve soon.

“It’s concerning and sad that the US has lost leadership, not just politically but perhaps more importantly for them, in their economy,” said Figueres. “The fact they are losing out on the green economy, losing out on investments in clean energy, losing out on the possibility of being a large exporter of clean energy and technology. It’s something that’s very difficult to understand and one wonders when they are going to wake up to that.”

Speaking at the launch of the second GLOBE International Climate Legislation study, Figueres was echoing the frustrations of UK Secretary of State for Energy and Climate Change, Chris Huhne.

Huhne re-iterated the need for a globally binding deal and said that the UK had made this clear to the Americans.

“I don’t think President Ronald Reagan would have decided that the best way to deal with the international missile race was through voluntary pledges. Exactly the same thing applies with climate change,” said Huhne.

“The US has recognised the need for a globally binding framework in the past and I believe the US will recognise it again in the future. It clearly needs commitment from other key players. One of the most frustrating things about these talks is the way everybody is waiting for the other to go first. Somebody has to lead and at the moment that is Europe,” he added. 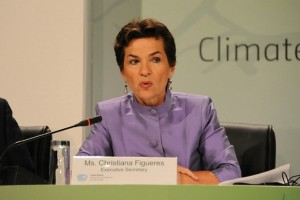 Ms Figueres said it was "distressing and sad that the US had lost leadership". (Source: UNFCCC)

Canada also confirmed on Monday that it would not sign-up to a new period of Kyoto despite a softening of stance from the Chinese. China has said for the first time that it would consider a legally binding deal. Despite having previously stated that any deal without China was not worth signing, it would appear that their bluff has been called.

The EU has suggested that Parties in Durban should agree a timeline for talks on a universal deal on climate change. It wants to see an agreement by 2015 and enforcement by 2020. The US has stated that it will not consider a deal until other major emerging economies sign up. China and India have both said these dates are too soon.