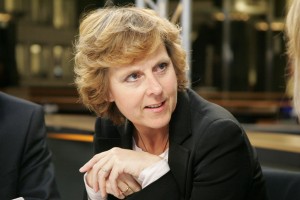 EU Commissioner Connie Hedegaard said she was concerned by the lack of urgency at the talks (Source: Connect.euranet)

Connie Hedegaard, EU Commissioner for Climate Action warned that the difficulties seen last week at COP17 in Durban will not be solved in the late night hours of Friday and the process must speed up this week.

She said that without the political will, the negotiations in Durban would not be a success, despite the progress which has already been made.

“I am concerned about the pace at which things are developing. I think we should not believe that all these very difficult issue could be settled in the late hours on Friday. So the European Union are pushing for ambition. We are pushing for our roadmap because we thought this was the best possible solution we would think of and it is what we could and should get from here.”

The EU roadmap is a pathway put forward by the continent that would lead to a climate treaty that would be legally binding and ensure governments cut emissions.

Last week the Polish head of the EU delegation, Tomasz Chruszczow said there was growing support for the measure; however countries including the US, Canada and India are still blocking progress towards a new legally binding deal.

And on Monday Peter Kent, environment minister for Canada announced the countrys removal from the Kyoto Protocol saying they would withdraw by the end of 2012.

Connie Hedegaard warned that any deal agreed by the end of this week must be for the long-term.

She said: “It is not good enough to get something that looks like a success it needs to be a real success not just for the process but for the climate.”