Gender Day: women “are more than 50% of the solution” 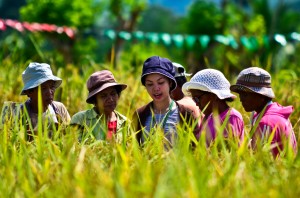 “We are 50% of the population around the world and we represent more than 50% of the solution,” said the head of the UNFCCC Christiana Figueres when she came to the Climate Change Studio for Gender Day on Monday.

“It is not about inserting the word gender into a negotiating text and into an agreement,” she said. “It is actually about using these agreements to get down to the women who are on the ground and in the field and for them to actually be able to benefit from this.”

She was referring to a growing area of the climate change negotiation that looks specifically at the growing disproportionate climate impacts that are being felt by women across the world.

Women represent just over 50% of the global population but account for 45-80% of food production. It is also predominately women who, in many parts of the world, collect resources – including cooking products and water – and Winne Byanyima director of the UNDP Gender and Development Team said women globally do two-thirds of the working hours, while only owning 1% of property and 10% of income.

While these inequalities are not linked to climate change they are exacerbated by the changing climate. They have to travel further for resources, work harder in worsening conditions to get food to both feed the family and to sell. As the care givers of the family they are most impacted by climate related ill health in the family.

Byanyima said: “Because of these differences in climate impacts on them it is very important that in a negotiation like this that a new global climate policy addresses those differences between men and women.”

But many believe that women are not only most exposed to the effects of climate change but that they are also great agents of change, having the ability to implement shifts in their households and their role at the heart of education.

Figueres said: “Women are perhaps our strongest key agent of adaptation. On both sides, because of the vulnerability and because of the potential that women have to contribute to the solution, they really are one of the most important components here.”

Mary Robinson former president of Ireland and founder of the Mary Robinson Foundation echoed these sentiments. She said it was important to give women a voice in the negotiations as they are on the front line of the problem.

She spoke of her friend Constance Okellet – a subsistence farmer in Uganda – who faces the real threat of being unable to feed her family next year due to drought destroying her crops. It will be her burden to provide the food and her job to look after the children if they are poorly affected.

And it is this mothering instinct and multi-generational thinking which Robinson believes is so important.

“That is another reason for bringing women leaders together. We are actually instinctively more inter-generational,” she said. “I actually instinctively think about my four young grandchildren who will be in their 40s in 2050, when the population will be over nine billion. What kind of world for children of 2050?”

To take on this role, though, women must be given the opportunity, something many believe is still lacking. Boardrooms, banks and politics are still for many countries a male dominated world, leaving women with little of the power.

Maria De Fatima, Minister of Environment in Angola said her country represented this trend towards larger roles being dominated by men. She said: “You have to remember that in Angola women represent 50 per cent of the population but so far we are not represented in terms of political issues in which women can respond. We have to prioritise all the matters related to women and climate change.”

Over recent years there has been a noticeable shifts in the women involved in the climate change negotiations, with key roles including the head of the UNFCCC and COP16 and COP17 presidencies being filled by women representatives, many key environment minister posts filled by women and six agreements specifically looking at gender issues agreed at Cancun.

However, all of the panelists discussing the issue for Gender Day agreed that there was much more to do to get the gender issue further ingrained in the climate change debate.

Robinson said: “Although there are a lot of individual ministers they were constrained to raise the gender issue and on the whole they didn’t and there was a tendency to think climate is gender neutral. It’s not.”