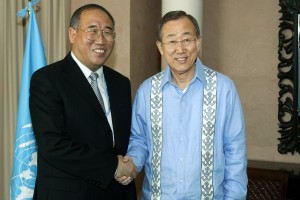 Ban Ki Moon with Xie Zhenhua, who told reporters they would talk about a legal deal in 2015 if the science said so. (Source: UN/Paulo Filgueires).

The BASIC group of nations condemned developed nations for breaking promises and attempting to distract the process from their own obligations on Tuesday.

The bloc, which includes South Africa, Brazil, India and China, said that a second period of Kyoto commitments was vital and that industrialised nations must focus on that.

“Developing countries should not be asked to make a payment every time an existing obligation becomes due on the part of the developed countries,” said Jayanthi Natarajan, Indian Minister of State for Environment and Forests. “We have already walked the extra mile and in fact many of us are already doing more than developed countries.”

The group also said that it would consider looking at an appropriate text for a legally binding deal, which it backed in principle, in 2020.

Chinese Minister responsible for Climate Change Xie Zhenhua appeared to contradict this assertion adding that dependent on the scientific evidence in the next IPCC report, China would be ready to talk about a legally binding deal in 2015.

The Indian Minister then launched an attack on “unilateralism”.

“The EU’s unilateral civil aviation tax under its Emissions Trading Scheme (ETS) is a trade action, hidden in the guise of climate,” she said.

The EU has said that all flights landing or taking off in Europe will be included in its carbon trading mechanism.

Head of Environment for British Airways, Jonathon Counsell, dismissed the claims: “We don’t believe that. The EU ETS is genuinely there to address aviation’s contribution to climate change and in principle we support that,” he said.

“It is the most cost effective way to address your carbon dioxide emissions. Effectively implemented it can be the right first step and we want to see the global industry covered in a cap and trade scheme,” added Counsell.

“BA has always supported the implementation of an effective emissions trading scheme as a first step toward a global sector approach. We have some concerns about the existing scheme. We believe it will result in non-compliance and retaliatory action from non-EU airlines,” he added.