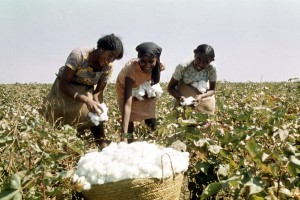 Women farmers count for between 45 and 80% of food production (Source: UN)

As COP17 moves into its second week, heads of states and ministers join their delegations and the talks intensify, is the voice of women being represented sufficiently in the process?

Making up over 50% of the population – and 60% in some of the world’s poorest countries – the effects of climate change are more acutely felt by women.

With women also being at the heart of many households in the most climate vulnerable areas – both as care giver and as decision maker – there is a huge potential for them to act as agents of change.

Ahead of COP17 women’s day, where the Climate Change Studio will be joined by Christiana Figueres, head of the UNFCCC, Winnie Byanyima, Director UNDP Gender Team and Cecilia Njenga, from the UNEP, to name a few, we took at look at why gender and climate change is so important.

While in most communities both the men and women, particularly in the developing world, are either already experiencing or will experience climate change vulnerabilities, research has shown that this impact is being felt worse amongst women.

Women farmers account for around 45-80% of all food production. As droughts, flooding and other natural changes put their agricultural livelihoods at risk – both limiting the food for the household and for selling – work becomes much harder and research by the UN found that it is the women and the girls who experience the most noticeable health decline.

In most communities it is also the women who predominately collect the fuel for the home for example firewood and agricultural crops, and water. With women travelling further distances to find these sources of energy, they have less time for domestic tasks, less time to earn money and are also more at risk of injury or sexual harassment.

Finally with many climate impacts – flooding and drought – disease and illness spreads and with the traditional role of women as mother and caregiver, this puts even more stress of their daily lives.

When Mary Robinson, former President of Ireland and founder of the Mary Robinson Foundation – Climate Justice spoke at the Climate Change Studio last week, she said: “It is an issue that is fundamental to climate justice, to the idea of putting a human face on climate, the importance of both food and nutrition security and women for agents for change who are going to bring about the changes on the ground.

Climate change – and the UNFCCC negotiations – however, also offer the potential for the empowerment of such women and a chance for them to be put at the heart of the decision making process.

But while there are signs of this change taking place, with UNFCCC Christiana Figueres, COP 16 President Patricia Espinosa and COP17 President Maite Nkoana-Mashabane all representing  women being put at the centre of the process it continues to be potential which is unrealised.

While more and more countries have female climate ambassadors amongst their delegations, for many countries – particularly in the EU, Americas and African States – the top roles within the climate delegations continue to be dominated by males.

Speaking at the Climate Change Studio Espinosa said: “I think that now it is basically important that the negotiating process is in the hands of women. This was already the case last year in Cancun. I am very happy that my successor is a previous foreign minister of Africa – not only that but an environment minister of South Africa but also a woman.

“Many many households in all countries of the world are really under the charge of women – under the authority and being provided for by women. Also the role women play also as educators is very important not only with the teaching but in the everyday life within their families (it is true that we are all educators to a certain extent but it is more true for women, so it is important.

“We do need to put an emphasis on mainstreaming gender issues in the policies which address the fight against climate change. I think this is the big challenge now.”