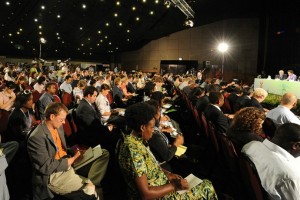 There is much still to be discussed in Durban as time runs out to save Kyoto (Source: UNFCCC)

China has said that the failure to reach a second commitment period of Kyoto would kill-off the protocol and damage the UN process of climate change talks.

“We must decide on a second commitment period of Kyoto. If we don’t get a second period, Kyoto will be dead and it would do serious damage to the multilateral process,” said Su.

“We need to focus on what must be done immediately. The Green Climate Fund (GCF) must be operationalized as a matter of urgency. We must determine the original capital for the GCF so that we don’t just create an empty shell.”

Su also called for more action on the Bali roadmap which is already two years behind its original timetable, which called for a key decisions to be made in Copenhagen in 2009.

He also said that work on adaptation needed to happen immediately and called for a cut through the red tape.

“This is the African COP and we should look at the urgent issues of adaptation. Not just looking at reports of reports and holding seminars about seminars. We need to do something concrete. On the ground.”

China had hinted last week that it would consider a legally binding deal in the future but is not comfortable with the 2015 deadline that the EU proposes for the conclusion of talks on such a deal.