Downtown Durban came to a stand-still on Saturday morning, while the streets were awash with colour as thousands of activists, environmentalists and community members joined together to march for climate justice.

The aim of the march was for the groups to join together and take their memorandums to UNFCCC Chief Christiana Figueres and COP17 President Maite Nkoana-Mashabane.

When faced with the crowds Mashabane, an African minister spoke to the crowd about her understanding of the impacts of climate change on Africa and her personal desire to see a strong outcome from the conference, while an emotional Figueres referred to the crowd as her brothers and sisters and re-spoke a message she said she was given earlier in the week by the ‘One World’ musical children, “Do more, do more, and when you have done that, do more.” 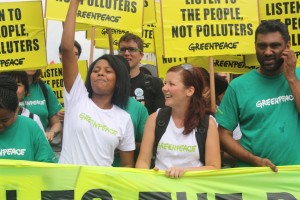 Groups had gathered as early as 8:30 this morning in Durban to assemble themselves for the procession which would take them through the city of Durban, past the ICC and continue down to the beach front for a rally, and despite the early start and several delays the atmosphere in the city remained friendly and upbeat.

While the COP17 local volunteers came – a sea of green – in their uniforms, giant white balloons highlighted the ActionAid group

And more groups joined the crowd, all turning up with their brightly colour banners, matching t-shirts and their own songs and slogans ringing out, they joined together to make a stand for climate justice. 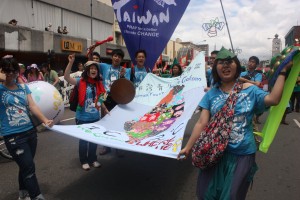 Ilana Soloman for ActionAid – one of the many NGO’s present at the march – said: “We are standing with the worlds poor and demanding a just global outcome. Climate change is deeply impacting the poorest people in the world who have done the least to create the climate crisis and we’re here marching with 20,000 people showing our support for poor communities all over the world.”

“The solutions to the climate crisis are all out there. We know how to reduce emissions. We know how to generate the finance needed to help the poorest communities. There is absolutely no excuse to leave Durban without a truly ambitious and just outcome and we are not going to accept anything else.” 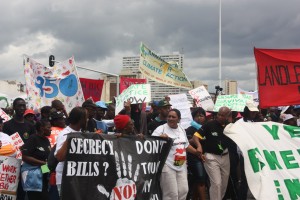 Movements from around the world were joined with those with a more local story to tell and aim to achieve. Betty Legodi from the African Rural Women’s assembly said she had come to Durban with the aim of getting help for her community against climate change that had “ruined the earth and ruined the air”.

And Daniel Skhosana from Friends of the Earth South Africa said his biggest aim was to put an end to the pollution which was destroying local communities across South Africa.

But he was positive about the effect hosting COP17 in Durban was having on the region. He said; “We are joining the march so we can speak up about climate change because it is affecting us a lot. Having the COP here has made a huge impact because people are taking notice and are aware of climate change and how much it is affecting the community at large – the whole of South Africa.”

As the crowds moved off – towards what many have now termed the ‘Conference of Polluters’ the high spirits continued. At every point along the crowd music was played, songs were sung and slogans were shouted at top volume, as the groups aimed at getting their voices heard. 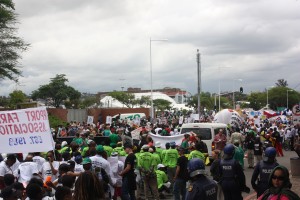 Crowds as far as the eye could see

Nothing could dampen the spirits of the crowds – not the heat or the rain – and while the police presence was very noticeable and the security tight, the organisation of the event was successful at keeping the order and the atmosphere remained good throughout.

And as the crowds turned into Bram Fischer Road, running alongside the ICC, where they would be handing their memorandums to  Figueres and Mashabane both the security and the excitement amongst the crowd intensified. 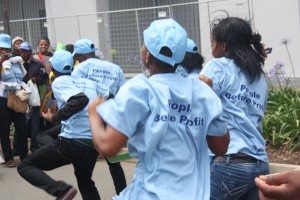 Both women spoke of their ambition and said that hope was not lost yet, and the conference could succeed at getting a just outcome.

Next week heads of state and key ministers will be joining the countries delegations as they spend the final week of the conference trying to hash out the details towards a final outcome from the conference.

And the protesters and marchers today gave their own warning that they would  not be giving up and would be putting pressure on the conference over the next week to succeed where previous ones have failed.