Greenpeace Germany: EU “hides behind low ambition” of others 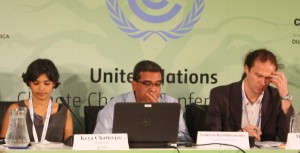 Martin Kaiser joined the panel for the CAN International daily meeting

The European Union must stop hiding behind other countries’ low ambitions and use the second week of the conference to fight for a global deal, according to Greenpeace Germany.

Speaking as the first week of the conference draws to a close and Heads of State are expected to join their delegations in Durban, Martin Kaiser from Greenpeace Germany slammed the European Union for pulling away from the talks and letting other parties take the spot light.

“The European Union has come to Durban to hide behind the low ambition of other big industrialised countries like the United States,” he said. “And then they will say at the end of the conference ‘We have tried but we have not achieved anything’.”

He said that while Europe continued to hold off making a decision between a five year plan which could see a push for a new global deal by 2015 and an eight year plan which could hold off any new agreement till 2020, they were also backing away from a more ambitious 30% reduction target over their current 20%.

Kaiser said: “There is no agreement within the European Union. There is no political will to solve this issue…Where is the willing to fight next week for an ambitious outcome in Durban – from Merkel, from Sarkozy, from Cameron and from Barosso.”

“We don’t see it yet but it is clear that if they don’t try to fight on the one hand for an ambitious decision about the Kyoto Protocol and on the other hand for a legally binding treaty mandate by 2015, then I think it will become true that this process has become just about discussing adaptation.”

He also said the European Union should not hide behind the Euro Crisis and the financial crisis as a reason to withdraw from the UNFCCC process saying it was a matter of survival.

With ministers and Heads of State set to join the delegations for the second week of the talks, today’s press conference came as a reminder that countries are running out time at this year’s negotiations – their final chance to set in motion a deal period to follow the expiry of the Kyoto Protocol.

Keya Chatterjee from WWF also emphasised that time was running out for a new deal. After taking a year away from the process she said she was shocked by how little had happened in the last two years.