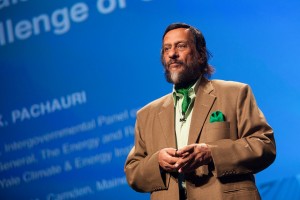 The world’s chief climate scientist has told RTCC that he is worried about the lack of any urgency among delegates at COP17.

A recent International Energy Agency (IEA) report stated the world has five years to act before climate change runs out of control.

A series of similar reports from the Intergovernmental Panel on Climate Change (IPCC) and US-based Berkley Centre also observe rising temperatures as a result of human-related greenhouse gas emissions.

But speaking in his temporary office beneath Durban’s International Conference Centre, IPCC Chairman Dr Rajendra Pachauri told RTCC he feared negotiators attending the conference were unware of the dangers ahead.

Asked if he felt they felt the urgency he suggests is required, Pachauri said: “I’m afraid I don’t, and that’s precisely why it’s so important to emphasise and re-emphasise the scientific findings.

“As it happens this year has been a special year for the IPCC – we brought out two special reports – the first dealing with renewable energy resources and climate change mitigation, and the other one dealing with extreme disasters, and how we might be able to advance adaptation to these events

“It is a unique moment, and the moment still exists in this COP to be able to inform the delegates about the seriousness of the impacts we’re going to face if we don’t do anything.

The latest reports in Durban suggest that extending the Kyoto Protocol in its present form is increasingly unlikely, causing friction between a number of delegations.

On Monday Canada’s Environment Minister Peter Kent said Kyoto was ‘in the past’, but refused to confirm whether Ottwa was considering withdrawing from the treaty.

China has been openly critical of this stance, with the Xinhua News Agency quoting officials as saying Kent’s comments had left delegates ‘angry and depressed’.

Russia and Japan have already refused to contemplate a second commitment period in its present form – as it does not currently hold the world’s two greatest emitters, China and the USA, to binding targets.

With the EU also apparently reluctant to make a unilateral decision and push ahead with extending the Treaty, its future looks bleak, and this is a prospect that Pachauri clearly finds intensely frustrating.

“Extreme precipitation is on the increase…so the point I’m making is that it’s critically important to lay these facts before the delegates at this conference and that they understand the imperatives and the essentially of taking action on a timely bases, otherwise they just get involved in short term political issues,” he said.

“I’d like to see people leaving this place with a sense of optimism, and a feeling that we’re on the move…that we’re able to deal with this problem effectively and collectively. This is where we need to see confidence created in the multilateral system, and secondly in terms of out ability in human society to deal with this challenge.

“Most importantly I would like to see people going away from here fully understanding some of the scientific imperatives about why action has to be taken and the attractiveness of taking the right steps.”