Occupy COP17 calls for climate justice for the majority 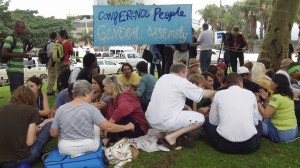 Groups discuss their own solutions for climate justice

Occupy movement spread to Durban for the start of COP17, protesting at the perceived lack of access to the Conference Centre for members of the public.

The Occupy COP17 General Assembly, meeting at a designated spot just outside of the conference centre boundaries, was aimed at providing a forum for those who wanted to find new solutions to the climate change problem and discuss climate justice.

Durban has a proud history of peaceful protest. This is the city where Nelson Mandela cast his first vote and Mahatma Gandhi held his first Natal Indian Congress reception.

“Last year more than 350 thousand people died from natural disasters related to climate change. We cannot be part of this genocide and this ecocide. The only way we can stop this is if we are able to organise in the whole world like we are doing here.”

With Africa predicted to experience the worst of the climate impacts, the Occupy Movement called for more voices to be involved in the COP17 process from the African continent, saying it is unfair that so many ‘ordinary’ people are excluded from the talks.

While not a large protest, those who did attend had a lot to say on the issue of climate change, and using a human microphone (you say something and everyone repeats it), aimed to make themselves heard beyond their gathering.

After speeches to open the talks, the groups split off to discuss their own ideas for solutions, all against the backdrop of a ‘Conference of the People’ banner. 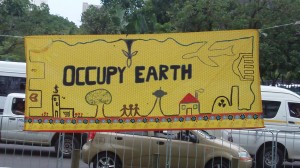 The Occupy Movement moves to Durban

Meanwhile another group spoke about what the term climate justice means, saying that ultimately a new deal needs to be enforced that will lower emissions and be fair to the developing world.

The  Occupy COP17 general assembly will take place every day during the summit, starting at 1pm at Speakers Corner, junction of  Walnut Rd and Bram Fischer Rd across from the Durban ICC.