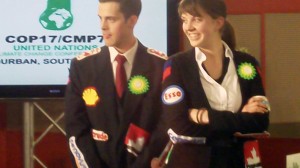 The Canadian government have been told to stop “putting polluters before people” by their own climate change youth delegation.

Representing what they called the influence big polluting companies have over the Canadian government and the Canadian delegation, the ‘BituMenswear’ uniforms consist of jackets with logos from all the major companies involved in the controversial Tar Sands extraction.

The meeting coincided with the latest rumours that the Canadian government plans to completely remove itself from the Kyoto Protocol, with an announcement expected next month.

Canada’s environment minister had already said he was unwilling to sign up to a second commitment period under the Kyoto Protocol if it were to be extended – as many representatives including the UNFCCC Chief Christiana Figueres are calling for at the conference.

Canada’s Alberta Tar sands hold massive reserves of oil, estimated to hold approximately 175 Billion barrels of crude oil, with production expected to double by 2015, despite the recent news that the Keystone XL Pipeline from Alberta to Texas would not be routed through the USA for the forseeable future.

The youth delegation said this move, as well as the continual promotion of the oil and gas industries means Canada is condemning the world and all its peoples to irreversible climate change.

Speaking at the meeting Sonia Grant from the youth delegation said: “These rumours are just another example of the Canadian government putting polluters before people and that is what we are here to protest.”

The Canadian youth delegation is calling on its government to stop subsidising the oil industry and invest more into renewable energy sources and climate change mitigation.

They say that without this fundamental change in the attitude of the Canadian government any moves forward over the next two weeks would be insignificant.

Matthew Chisolm, a member of the youth delegation and model for the new uniform said: “It doesn’t matter what is achieved, if the dialogue continues as before it won’t make any difference.”

He also called on the government to stop “selling out the global south” and make sure that a deal is reached that takes into account the UNFCCC “common but differentiated responsibilities’ policy.

The youth group also praised the Occupy COP17 protests that took place today. In the same way the protests aimed at providing a voice to those the Climate Summit didn’t, they aimed to make sure voices from across Canada would be heard.

Grant said: “This year the Canadian delegation did not send any opposition members to the conference. We are here to bring the voice of our generation because it is our generation who are going to be effected.”

Canada won the first and second place in Monday’s TckTckTck ‘Fossil of the Day’ award, handed daily to the country that does least to enable the development of a global deal. The UK came third.