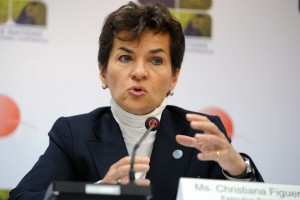 Figueres said many of the COP's critics didn't understand its complexity.

Climate change has the potential to trigger a global revolution, according to UNFCCC chief Christiana Figueres.

Speaking to the press on the eve of the UN’s climate change negotiations a clearly emotional Figueres also sought to emphasize the importance of the talks and the scale of the climate change challenge.

“This is nothing short of the most compelling energy, industrial and behavioural revolution that humankind has ever seen,” she said.

“There is barely a sector that is not touched by this issue. This is not just an environmental meeting. What is being laid down here [at the COP] is the foundations for a revolution. It will revolutionise the way we talk to each other, how we travel, the way we produce and consume.”

When asked to comment on the perception that those attending the talks are doing so with low ambition, Figueres went on the offensive.

“Anyone that talks about there being low ambitions is doing so because they do not understand the complexity of the negotiations,” she said. “There is never a guarantee at the COPs, they will always be challenging and so they should be. If they were easy we would have completed a deal years ago.

“The countries coming here are serious about listening to each other and finding the common ground that is needed in order to move forward,” said Figueres.

On Monday Figueres and South African President Jacob Zuma will inaugurate the seventeenth round of UN climate change negotiations with the design of the $100bn Green Climate Fund and the potential second commitment period of the Kyoto Protocol top of the agenda.