‘Kyoto is not dead’: EU sets terms for second period of commitment 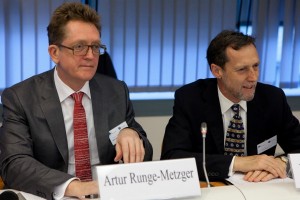 The EU has declared that it will enter into a second commitment period of the Kyoto agreement, but only if the world’s other nations set down the path toward their own legally binding emission cuts.

Speaking at the first EU press briefing in Durban on the eve of the UN climate change talks, the bloc said a new phase of Kyoto commitments would depend on certain conditions being met by developing countries not included in the protocol.

“We need to see other countries agree to a roadmap whereby a timetable of negotiations for a legally binding deal is drawn-up,” said Tomasz Chruszczow, head of the Polish delegation in Durban. Poland currently holds the EU Presidency. “A deal must be agreed by 2015 and it needs to come into force by 2020.

“We need a roadmap that brings 100% of global emissions under one umbrella. The legal framework can be the same for all nations. The commitments and the deadlines can be different,” he said.

In addition to the pledges from other nations, Chruszczow also called for new market based mechanisms and robust carbon accounting procedures before the EU would commit to a second period of Kyoto.

The group also clarified its position in other areas of the talks including its long-rumoured deepening of emission cuts to 30%.

“I don’t even think the 30% question will be asked here in Durban,” said Artur Runge-Metzger, lead negotiator for the EU. “Nobody else is talking about increasing their level of ambition.

“Kyoto is not dead. It will continue to run for those countries that have ratified it, even those that have said they will not sign-up for a second designated commitment period. The framework remains. It is a very useful legal instrument and it has shown it can work. It needs some improvement and hopefully we can make those decisions here. Voluntary action is not enough,” said Runge-Metzger.

“Looking for a new deal by 2020 at the latest is not the same thing as postponing Kyoto, we will continue to press ahead for a second period of commitment under the Kyoto agreement but a new deal should come as soon as possible,” added Runge-Metzger. “We are not ditching our commitments. Others are. The Bali roadmap included provisions for countries to make moves toward binding agreements. That was supposed to happen in Copenhagen but we are still waiting.”

The EU represents 11% of global emissions and has stated its reluctance to persist with Kyoto unless developing nations begin their own works towards binding deals.