The green movement’s hopes for Durban 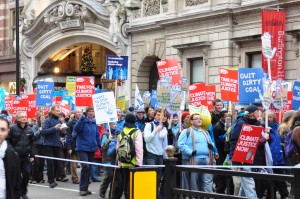 COP17 will get underway on Monday amidst increasingly urgent calls of concern that the conference will not go far enough to reach a new deal to follow Kyoto when it expires at the end of 2012.

Diplomats and negotiators from around the world will be joined in Durban, by key players in the green movement, aiming to put pressure on the conference parties to go further than expected and agree a lasting deal.

The Occupy movement, which has seen camps set up in London, New York and a number of other cities around the world, is also planning to make its presence felt in Durban, protesting against market-based solutions to global warming.

RTCC has been speaking to some of these groups to see what they hoped the conference will offer.

We’ll be reporting from outside the conference venue tomorrow and on Monday morning, as the summit gets underway – stay tuned for all the latest developments.

Friends of the Earth:

Executive Director of Friends of the Earth UK, Andy Atkins: “Over recent years we’ve been sleepwalking towards a climate disaster – it seem we’ve now broken into a sprint. The world must wake up to the enormous threat we all face and agree tough international action at the UN climate talks in South Africa.

“The wealthiest nations must take a lead by agreeing legally-binding cuts to wean their economies off gas, coal and oil – and providing funds for poorer countries to develop cleanly. The time for excuses is over as climate change is already starting to bite – it’s time for real international leadership.”

Jamie Henn Communications Director at 350.org: “It’s a good thing that South Africa has a strong history of social movements, because that’s exactly what the world needs in order to make progress on reaching a deal to address catastrophic climate change. We’ve seen that the most important ingredient missing from the UN Climate Talks is political will. Creating that political will is going to take some real pressure, both inside the negotiations and out in the streets.”

In their COP17 briefing, Christian Aid said: “Christian Aid would like parties to agree a provisional date for a second commitment period to enter into force. This would ensure that countries continue to be bound by the commitments they have made and that there is no gap caused by waiting for a new agreement to be ratified and come into force.

“Developing countries should oppose the creation of a single treaty under the Convention to replace the Kyoto Protocol until necessary safeguards guaranteeing adequacy, equity, historical responsibility, and a science – and rule – based system have been secured, and it becomes clear that all developed countries, including the US, will agree to be bound by terms that are fair. Such safeguards could be incorporated into any decision giving countries the necessary mandate to establish a new instrument.”

Kelly Dent, Senior Climate Change Advisor for Oxfam: “From the Horn of Africa and South East Asia to Russia and Afghanistan, a year of floods, droughts, and extreme heat has helped push tens of millions of people into hunger and poverty. This will only get worse as climate change gathers pace and agriculture feels the heat. Governments must act now in Durban to protect our food supply and save millions from slipping into hunger and poverty.”

“Durban will not delivery everything that is required of an effective global response to climate change. But governments must build on the past, by continuing Kyoto, planning for a future legal deal to further slash emissions before 2020, and by mobilising the finance poor people need now to cope with climate change.”

In their COP17 briefing WWF International said: “WWF believes that COP17 in Durban presents governments with an important opportunity to lay the basis for a transition to a new and ambitious climate regime that will not only reflect what the science says is required, but will also reflect a changing world, in which the old distinctions between developing and developed countries are being redefined.

“Leaders need to recognise the Durban COP as a crucial tipping point in efforts to address runaway climate change, and to use their political resourcefulness to grasp this unique opportunity. Because ultimately there are more opportunities than risks in ensuring that we have a successful outcome in Durban. The people of Africa and the world will be watching.”

You can contact the author of this story @rtcc_tierney