Caroline Lucas: We don’t have to pick between the environment and the economy 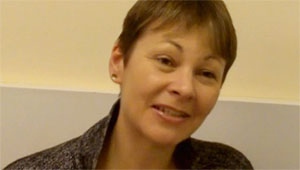 Caroline Lucas says  governments do not have to choose between the environment and the economy.

In an interview with RTCC ahead of the COP17 summit in Durban, Lucas argues that promoting ‘green’ measures will build a stronger global economy, and says she is deeply concerned that the current UK government is backing away from its environmental commitments.

As the UK’s only Green MP, Caroline Lucas offers a unqiue perspective in a parliament of 650. Since the 2010 election she has made a name for herself as a campaigner on issues including the envrionment and social justice, and was named ‘Newcomer of the Year’ in the Spectator’s 2010 Parliamentarian awards.

She says that the economic crisis should not be a reason to forget the green agenda, and that it should play a more central role than ever – cutting the countries emissions and stabilising the economy.

In a wide ranging interview she also warns that the environmental crisis is “getting an awful lot worse”, and urges the UK government to show leadership in Durban.

RTCC: Do you think in the current economic climate that the green agenda has become less relevant and less of a priority?

CL: I think that at a time of economic difficulty the green agenda should be even more important than before. It can sometimes be a hard case to make that point but actually when you think about it the green agenda is one of the fastest ways we have of creating jobs and of addressing the economic crisis that we have. If we want to stabilise our economy then investing in green jobs is just about the best way you could possibly do it.

I think that is what is so frustrating when you see our government and many governments really turning their back on the green agenda and saying that we can’t afford it while at the same time unemployment is rising and the economy is getting into a worse state. What we need to do right now is to properly have that investment in renewable energy, energy efficiency, insulating every home in Britain for example – that would be one of the fastest job creation schemes you could imagine.

RTCC: Do you think that there is a new narrative which could be adopted to help push this back on the agenda?

I think one of the ways of doing that is precisely by underlining some positive impacts that can come from addressing the green agenda. I think we should be talking about green jobs. I think we should be talking about wider security. If we think about security as not being dependant on so many other countries for our fuel resources, for example, and investing in renewable energies here at home; that I think is a way to make the subject more relevant to people at a time when their minds are understandably on the immediate economic issues in front of them.

RTCC: Are you concerned that the UK government, who once showed real leadership within the climate process now appear to be taking a back seat?

CL: I am deeply worried that what we are seeing by this government is a movement away from some of its original rhetoric around being ‘the greenest government ever’. [Prime Minister] David Cameron came to power having had his moment in the limelight, hugging huskies and trying to detoxify the Tory brand essentially by saying that the environment was going to be key to their new way forward.

But actually what we have seen has been pitiful to date. I mean the decision just recently to slash the support for renewable energy for example in terms of the solar feed-in-tariffs is going to have a massively negative effect both on the potential for renewable energies and the jobs that were being created in one of the fastest growing industries that we have in this country. So it is deeply worrying that the government is turning its back.

We’ve had [UK Chancellor] George Osborne at the recent conservative party conference almost making a virtue out of the fact, saying we’re not going to go any faster than anyone else in Europe. That’s not leadership.

And the tragedy is that not only is that lack of leadership bad for the environment it is bad for the economy too. It is bad for British business and British jobs. The government needs to see that those two things are connected and by pursuing the one you can achieve gains on the other as well.

RTCC: If there was one outcome you would want to see from the climate talks and one policy to focus on what would it be?

CL: I always want at least two. In my mind I was tossing up between saying on the one hand we absolutely need to have a political commitment to the continuance of a second commitment period under Kyoto. For all of it’s difficulties it is the one tool that we have that is a legal tool that has mandatory binding targets on developed countries and that is why it is so important that we have to make sure that there is some way of that going forward.

But at the same time we also need the finances on the table and to be honest I think the two things are so interlinked. It seems to be that unless we can demonstrate to developing countries that we are serious about our commitment to tackling climate change then they are not going to want any king of binding agreement themselves in the future either.

That means that we need to show – as a demonstration of political good faith if you like – that we are serious. That means serious climate finance on the table. It was good that there was a fund set up at the most recent meeting of the climate change parties but now what we need to do is to make sure that it is properly financed and the ways that we could do that are through a so called Robin Hood tax – a tax on financial speculation – or indeed looking at a tax on bumper fuels, the kind of fuels that are used for shipping and aviation – shipping and aviation are both very fast growing emitters of greenhouse gas emissions and yet not covered by existing international agreements.

So there are measures out there that if the political will were there that governments could use to show that they are really serious about tackling this crisis. So I hope very very much that we might see some progress both on that financial commitment but also the political commitment for the continuance of Kyoto.

RTCC: After years of the climate negotiations stalling, is it time we turned our back on the UNFCCC process?

CL: It is difficult and I understand why people might be casting around saying this isn’t working lets look for another process. In my mind, yes we want agreements at all levels and if countries want to come together on a voluntary basis and do work to get emissions down then of course that’s a good thing.

But ultimately what we need is that binding, political, legal agreement and there is no getting away from that to be honest so while there may be other kinds of agreements around the periphery, that legal agreement under the UNFCCC needs to be there.

RTCC: With a second commitment period under Kyoto looking unlikely by 2012, are these the sorts of agreements which could be used in the interim?

CL: Of course we want progress to happen and I suppose in one way it doesn’t matter what the heading is, under which particular agreement it is happening as long as we are getting emissions down both in the north and south and making sure that whatever agreement we have is a genuinely equitable one, a fair one for the poorer countries because I am not surprised that they have a degree of suspicion really of whether or not the rich countries are serious about this agenda.

Anything that we can do to build up confidence and to build up good faith between the different parties to the climate change agreement is crucial but that shouldn’t be a substitute for a real deep commitment in finding a political solution around a binding emissions agreement of the type of Kyoto and I don’t see any way that we can get around that.