Ashton: Britain’s future security and prosperity at stake in Durban

Britain’s future security and prosperity is at stake when the world gathers for the COP17 climate summit in Durban next week, according to the Foreign Office’s lead climate official.

Speaking to RTCC, John Ashton, the Foreign Secretary’s Special Representative for Climate Change, said the UK cannot afford to take a backseat role at the negotiations.

The Eurozone crisis, sluggish economic growth and Prime Minister David Cameron’s decision not to attend the talks will ensure limited media and political attention in Britain is focused on Durban.

But Ashton, who was appointed to the role of Special Representative in 2006 and has served under the Blair, Brown and now Coalition administrations, says it is vital the UK delegation make their presence felt at the talks.

“We do have a strong political foundation for being a voice of high ambition for climate change – it’s no secret that there is a degree of political consensus across all political parties in this country. All want to see a high level of ambition,” he told RTCC.

“That’s not in my view because of a desire to dictate to the rest of the world, or a desire to be somehow more altruistic than anyone else. It’s because of a hard-edged understanding that a world that is failing to deal with climate change is a world where British people will not have decent prospect of security and prosperity.

“What do taxpayers in the end pay for in return for government? They expect government to maintain the conditions for security and prosperity. So that’s why having reached that conclusion, I don’t think there’s a debate to be had – I think we then just say, how can we act as effectively as possible as a force for effective high ambition on climate change?” 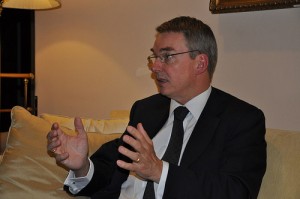 Britain has historically played a major role in brokering deals at the annual environmental summits. Margaret Thatcher set the ball rolling in 1989 with a speech at the United Nations, warning of the ‘damaging and dangerous ways’ in which man was affecting the planet.

In 1997 John Prescott played a major part in ensuring the establishment of the Kyoto Protocol, while 11 years later in 2008 Parliament passed the Climate Change Act, enshrining UK commitments to emission cuts in law.

But Ashton stresses this is not a battle the UK can fight on its own. In particular he cites the role of the European Union (EU) in building the foundations of a global low-carbon economy, through its support for binding emissions targets and introduction of regulations to support energy efficiency.

On November 16 the European Parliament passed a motion backing the Kyoto Protocol and extending its emission reduction targets, despite a perceived reluctance from some members – notably Eastern European parties – to commit to greater cuts.

And despite the current crisis in the Eurozone, which has seen the very basis of Europe’s unity openly questioned, he believes it can and will pull together on the issue of climate change.

“I’m struck by how much momentum the EU has been able to build despite the enormous distractions and the crises we have been beset by since 2008 and Lehman brothers. As with everything in the EU it’s a complex picture and you see different views from different countries,” Ashton said.

“The EU clearly has a lot on its plate, but I think if it stands back and says what have we achieved and what can we achieve, I think the climate and carbon story is quite an important part of that discussion…and I also think that EU member states acting individually would be a lot less than the sum of their parts, in trying to shape the global response.

“We’re the world’s largest single market. The decisions we take about our technology standards – and what are the technology standards for a low carbon world – are widely copied because a lot of other people feel the EU already has good institutions for setting technology standards, why should we reinvent the wheel? That gives the EU weight in the global economy beyond its direct imprint.”

While most government ministers will descend on the COP for the second week of talks, the UK and other national delegations will be in Durban from the start of the summit, working on the various strands that could form an agreement.

With the world’s leaders staying away, and financial turmoil continuing to affect the markets, many observers feel the real impact of COP17 could be felt in 2015 – in a sense these talks could be a building block for future developments.

But Ashton does finish with a warning for delegates taking these talks – and the UNFCCC process – for granted, and reminds all attending of the importance of moving forward.

“In a sense breakdown is always possible – and actually having had that once in Copenhagen it would potentially be terminal to have it again, so that really has to be avoided. On the other hand, what’s possible is promising. Progress on the Green Climate Fund and other Cancun issues – but part of it is a question over the legal nature of the regime we are trying to build and I think that really has two parts.”

“We know now that already it needs to be broader, you can’t deliver 2 degrees simply on the basis of the commitments made by the Kyoto parties with binding emission caps. Albeit we have to do it in an equitable way and respect the principle which has always been part of this negotiation: ‘common but differentiated responsibilities’. ”