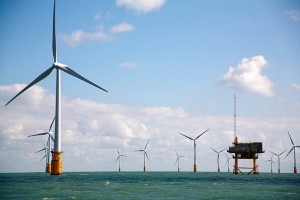 The Thanet Offshore Wind farm is the largest in the world (Source: Jamie Cook/Vattenfall)

The world’s largest installed offshore wind farm will receive £150 million in funding from the European Investment Bank (EIB) in a deal announced today.

The long-term financing package represents a significant portion of the project’s estimated costs of £780m. The farm is owned by energy generator Vattenfall.

“The Thanet Offshore wind farm demonstrates how offshore wind can achieve economies of scale and make a significant contribution to renewable energy supply. The EIB is committed to supporting expansion of the offshore sector to increase experience and drive commercialisation of cutting edge technology,” said Simon Brooks, EIB Vice President for the United Kingdom.

The Thanet wind farm was opened in September 2010. Its capacity of 300MW makes it the largest offshore wind installation in the world.

It will be dwarfed however, by the proposed London Array scheme, which at a capacity of 1000 MW, is the largest consented offshore wind project in the world.

The UK has pledged to source 15% of its energy from renewable sources by 2020. The scale of investment from the EIB will be welcomed by the renewables industry as it seeks stable government policy and long-term financing.

115 – The height of each turbine in metres

35 – The area the farm covers in square kilometres

780 – The cost of the project in million of UK pounds