Google leaves research legacy as it shuts down renewables project 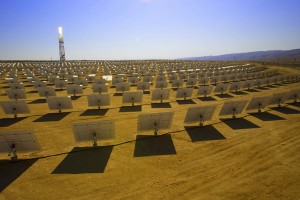 Google has announced that it is shutting down its renewable energy research programme and has made the results of its work so far available for further research.

The Renewable Energy Cheaper than Coal (RE<C) initiative involved research and funding for a number of projects. Its closure was confirmed on the company’s official blog.

The company said: “At this point, other institutions are better positioned than Google to take this research to the next level. So we’ve published our results to help others in the field continue to advance the state of power tower technology, and we’ve closed our efforts.”

RE<C provided finance for the world’s largest heliostat project and conducted research into the technology. Heliostats involve an array of mirrors reflecting sunlight onto a central raised boiler. The resultant steam is used to drive a turbine.

Google’s research found that using software to adjust the mirrors for maximum impact was cheaper than constructing the mirrors and their frames from more resilient materials that do not need corrected.

BrightSource Energy’s Ivanpah project in California received $168 million from Google. When completed it will generate 392MW of electricity.

Google also sponsored a geothermal map of the US that estimated the potential for geothermal energy of 2.98 million MW.

The company will continue to generate renewable energy on its own property and has restated its commitment to purchasing power from clean sources and improving the efficiency of its data centres.

Ahead of the UN climate change talks in Durban, developing nations are calling for regulations on intellectual property rights to be relaxed allowing a greater level of technology transfer.