A second batch of so-called Climategate emails, allegedly from the University of East Anglia’s (UEA) Climatic Research Unit, has been posted on a Russian website.

It is not clear who has released these emails or whether they are authentic. In 2009 a number of emails linked to the Unit were published, sparking accusations that scientists were misleading the public over climate data.

Three inquiries in the UK subsequently found no evidence of malpractice – and reacting to today’s news the UEA says it continues to stand by its science and its staff.

A statement said: “While we have had only a limited opportunity to look at this latest post of 5,000 emails, we have no evidence of a recent breach of our systems.

“If genuine, (the sheer volume of material makes it impossible to confirm at present that they are all genuine) these emails have the appearance of having been held back after the theft of data and emails in 2009 to be released at a time designed to cause maximum disruption to the imminent international climate talks.”

The publicity follows a similar incident ahead of the UN climate talks in Copenhagen in 2009.

The original release of emails was used by climate change sceptics to accuse scientists of collusion over data. All involved have been cleared of any wrong-doing. A recent independent study funded by climate sceptics including the industrialists the Koch brothers, confirmed the results of the IPCC science.

No accusations surrounding the content of the new set of emails have been made so far. 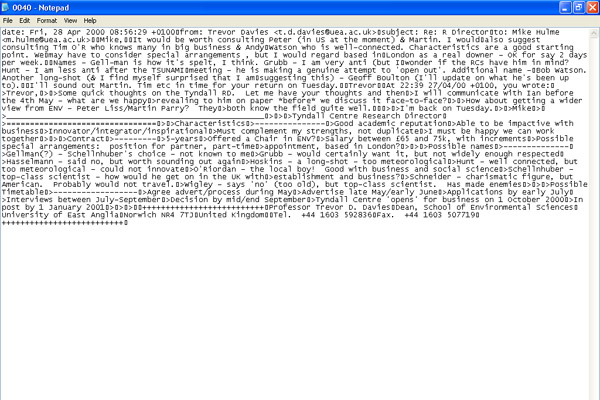 Two of the thousands of original 'climategate' emails.