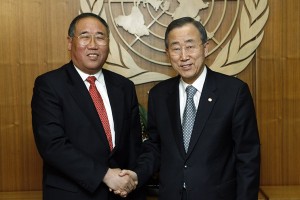 China will launch a carbon trading mechanism, embark on a public information drive and pursue commitments from developed countries at COP17 as it looks to combat climate change, according to a white paper released by the Chinese government today.

The report lists 11 key actions for the country’s mitigation and adaptation plans, in line with its most recent Five-Year Plan and its achievements so far.

The paper has been released “to enable the international community to fully understand China’s policies and actions for addressing climate change, and the positive results achieved” it states.

“We hope the nations of the world will translate their political willingness into concrete action,” said head Chinese climate change negotiator Xie Zhenhua, speaking at the launch of the report.

As part of its strategy the paper states that China will draw “on the experience of the international carbon emissions trading market while taking into consideration its actual conditions, gradually promote the establishment of a carbon emissions trading market…so as to give full play to the fundamental role of the market mechanism in optimizing the allocation of resources, and realize the objective of controlling greenhouse gas emission at minimum cost”.

The white paper lists previous climate change propaganda films including Facing Climate Change and Same Hot, Same Cool, the World Over, and declares the intention to continue in this vein.

“[China] will also extensively publicize knowledge necessary to respond to climate change and advocate low-carbon consumption through the mass media,” it says.

The paper also re-iterates the country’s commitment to reducing its energy intensity and calls for further commitments from developed nations – inside and outside the Kyoto Protocol – on emissions reductions ahead of the COP17 talks in Durban.

“China will continue to strengthen dialogues and exchanges with developed countries, initiate South-South cooperation on climate change…and provide practical support to other developing countries in coping with climate change.”

-Continue international cooperation with developed countries and through South-South cooperation