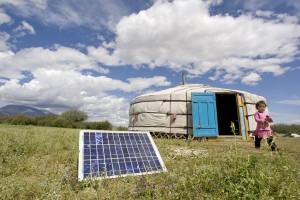 Innovation is championed as the best route to successful climate adaptation and mitigation but many under developed economies are in danger of being left behind. RTCC looks at the mechanism designed to address this imbalance.

The technology transfer mechanism is designed to encourage and facilitate the migration of climate fighting solutions from the global north to the south.

Although not yet fully finalised major challenges over intellectual property rights and funding are already apparent.

More work is sure to be done at the COP17 talks in Durban to find ways around these substantial roadblocks.

Why is it important?

Combating climate change requires major alterations to behaviour. For industrialised nations, that might mean people leaving their car at home when possible or the construction of renewable energy generation. In the developing and least-developed countries, innovating your way out of trouble is more difficult. Governments and residents live and operate within smaller comfort zones and lower tolerances for failure. Resources, finances and good governance can impinge technological development severely.

The technology mechanism is designed to help level the playing field and get the right technologies to the communities that need them most. It could be a new crop variety to boost agricultural output, a solar powered lamp for areas without electricity or an industrial scale carbon reduction practice.

How advanced is the mechanism?

The 20 person Technology Executive Committee (TEC) deals with the policy issues surrounding the technology mechanism. It is comprised of nine representatives from Annex I parties, three members from the following three groups; Asia & Pacific, Latin America & Caribbean and Africa. The final two positions are filled by one member from the Least Developed Countries and one from the Small Island Developing States.

It is the committee’s responsibility to liaise with governments, the private sector, NGOs and academic institutes to promote collaboration and cooperation on technology transfers and uses its findings to advise on policy.

The workhorse of the technology transfer mechanism put forward in Cancun is the Climate Technology Centre and Network (CTCN).

At the request of a developing nation the CTCN will work at a national and regional level to provide advice and training.

It will also build ties between relevant organisations and identify opportunities where environmentally beneficial technologies can flow to the global south.

There are calls ahead of the Durban talks for a formal linkage between the technology mechanism and the Green Climate Fund to provide some certainty on how the costs of accelerating technology transfers will be managed.

Perhaps the greatest source of conflict arises from the issue of intellectual property.

Those investing in the development of new technologies look for a return on their efforts. Intellectual property rights (IPR) protect that investment. The cost of this can be magnified when passing from rich to poor nations. Developing countries are looking for intellectual property regulations to be relaxed in order to lower prohibitively high prices.

The situation is frequently compared to the attempts by the major pharmaceutical companies to protect the IPR of their HIV/AIDS drugs from being copied by generic manufacturers and sold at lower prices to the developing world.

Removing IPR from the equation entirely also removes the incentive for further investment in developing new technologies. Enforcing it too strongly stops the technology from reaching the people that need it most.