Regional climate deal in Himalayas “positive example” ahead of COP17 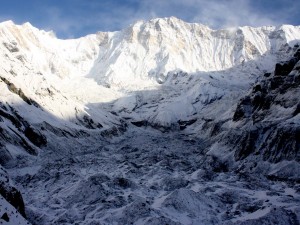 Mount Annapurna and Glacier. The Himalayan glaciers are under particular pressure from climate change.

With solutions at Durban “unlikely”, four Himalayan nations have signed a regional climate deal, to work together to adapt to the effects of climate change already witnessed in the region.

With a growing feeling that the Himalayas could not wait for a global agreement on climate, the four countries – Bhutan, Nepal, India and Bangladesh – signed a regional climate change adaptation declaration, following a two-day “Climate Summit for a Living Himalayas” in coordination with the WWF Living Himalayas Initiative.

And not only do the countries hope to protect their own environment and livelihoods, through this collaborative approach but hope that it will drive similar regions to do the same in the lead up to Rio +20 in 2012.

Lyonchhoen Jihmi Y. Thinley, Bhutan’s Prime Minister said: “The success of our initiative will not only have direct and immediate benefits for our own people, but we could be setting a worthy precedent for other countries that share similar conditions.

“With COP17 unlikely to yield any earth-shaking results, our hopes are pinned on the Rio +20 Summit. It is at this event that every nation and region must be prepared to play an active and committed part.”

The Himalayas – accounting for around a sixth of the world’s glacial ice, the largest source outside of the polar region – have become a symbol of the threats of climate change.

Warming temperatures, unpredictable rainfall and melting glaciers have meant that livelihoods, communities and biodiversity in the region all face threats.

Under the declaration, the four countries agreed to combine forces to increase the access to “affordable and reliable” clean energy sources, through a regional sharing mechanism – including diversification of supply and improved regional connectivity.

They also agreed a deal on adaptive approaches to improving and sustaining food production and while agreements on water security were somewhat diluted, agreements were made on future activities including collaborative ecosystem and disaster management, knowledge sharing in water use efficiency and understanding the climate impacts on water resources.

Bhutan’s Prime Minister also called for a new global economic approach that takes into account the value of natural capital, ecosystem services and social well-being for a sustainable future.

Liisa Rohweder, CEO of WWF Finland believes the declaration provides a positive message of action on sustainability and biodiversity ahead of the climate summit in Durban.

“The framework of co-operation will see the creation of an interconnected mosaic of conservation across the Eastern Himalayas crucial for communities that rely on the regions natural resources for their survival“, she said.

“These kinds of regional initiatives are really needed. We should take this as a positive example for the COP17 in Durban.”