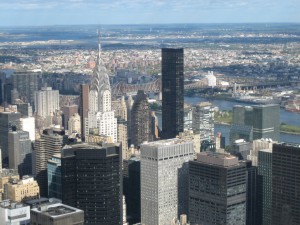 Climate change could radically change New York City with higher sea-levels, increased storm surges and periods of drought costing the state over $10 billion annually by the middle of the century, says a new report commissioned by the New York State Energy Research and Development Authority.

The study – put together by 50 scientists from Cornell University’s ClimAid group over two years – found that higher sea levels around Manhattan and Long Island and more frequent storm surges could leave many subway, highway and railway tunnels in and out of the city flooded with an hour and out of action for weeks.

It could also see as much as a third of New York City underwater – threatening airports such as LaGuardia and Kennedy which sit at sea level, and the business district which sits in the city’s lowest region.

And on the other end of the spectrum, average temperature rises of 5°F (3°C) by 2050 and 9°F (5°C) by 2080 could subject New Yorkers to power shortages and blackouts as people use more air conditioning, and put those who can not afford the extra energy bills at risk of heat stroke.

The report is intended to be a wake up call for residents, urban planners, water resource managers and businesses that New York is already feeling the effects of climate change, seeing historic floods in areas not prone previously and must adapt to worse conditions to come.

Arthur DeGaetano, one of the study’s authors told Buffalo News: “We have to realise that a lot of the things we do today, the crops we grow, how water systems are designed are based on climate data 50 years old. But with climate change we have to start incrementally rethinking how they might change.”

The report predicts a hit to many industries, including tourism, agriculture and fishing. Lower water levels at the Great Lakes and less snow in winter will mean a hit on the tourist industry, cold water fish such as brook trout and Atlantic salmon will not be able to survive the New York waters, costing smaller upstate communities which rely of fishing and hunting seasons, and dairy cow could suffer from heat stress.

Spruce and Fir trees could disappears altogether from the Catskills and West Hudson River Valley and many popular varieties of apple could also see a decline.

The report authors do offer some options for the state to adapt to the changing climate. Plating more low-pollen trees in the cities, for example, will help to reduce summer temperatures, and by improving coordination the state could reduce invasive plant species and preserve wetlands and existing animal species.

The report also recommends the state offer land swaps to homes and businesses in major wetland or flood risk areas and that the whole state should make a major energy conservation effort.

With transportation and water resources to take the biggest hit the by the changes, the report suggests major infrastructure changes. Low lying water treatment facilities and high-density housing which currently sit of flood susceptible area should be relocated to higher ground and more levees, sea walls and pumping stations should be built helping communities cope with the threats.