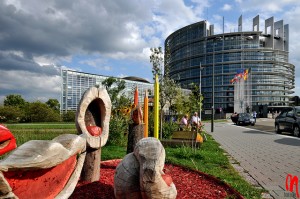 The European Parliament has voted for a resolution calling for the union’s members to give “public and unequivocal” support for the Kyoto Protocol at the COP17 climate talks.

The motion – passed by a huge majority – says the EU should show leadership in Durban and fight for a second commitment period of the Protocol.

In a statement released after this afternoon’s vote MEPs also say the EU’s economy would benefit from aiming for above 20% greenhouse gas reduction targets.

Jo Leinen, Environment Committee and Parliament delegation chair said: “International climate negotiations are at a crossroads between stagnation and progress – the EU must help to create a new dynamic in Durban.

“The economic crisis must not be used as an excuse not to act. The EU should back the Kyoto Protocol and work with other countries on a roadmap to ensure a comprehensive climate treaty is in place by 2015 at the latest.”

The motion provides a twist in the build up to the climate summit after European climate commissioner Connie Hedegaard said, last week, that the EU would only support a second commitment period under Kyoto if other large emitters signed up to a border framework of commitments.

Today’s resolution aims to address the concern MEP’s have over a gap between the current phrase – which ends in 2012 – and a second commitment. It says the EU should continue to fight at Durban for a continuation of the only international agreement that commits industrialised countries to reduce green house gases.

The resolution also calls on the EU to raise their own targets, above the 20% commitment they are currently aiming for in order to close the “gigatonne gap” between international reduction commitments and those scientists say are needed to limit global warming below two degrees.

The resolution did not, however specify how much beyond the current targets the EU should aim for, although calls from countries including the UK and Denmark have urged for 30% cuts across the region.

Despite coming under criticism the resolution also provided an opportunity for the EU to stand by their decision to include aviation in their emissions trading system from 1 January 2012, saying new measures must be found to curb emissions from industries not included in the Kyoto Protocol.

How to regulate these industries – including aviation and shipping – is set to be a central issue of the debates, particularly as any financial measures taken could be a great source of finance for the agreed Green Climate Fund.

Set to be another central issue, the resolution called for the EU to stand by their commitments towards this $100 billion per year fund – providing adaptation to developing countries needing to adapt to the effects of climate change – pushing for an agreement over sources and management of the finance at Durban.

The resolution was adopted with 532 votes in favour, 76 against and 43 abstentions.