US pushes through green growth trade deal at APEC summit 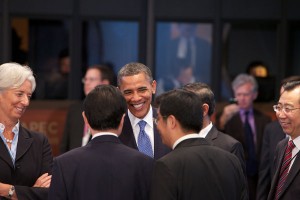 Ministers from the Asia-Pacific Economic Cooperation (APEC) nations have today agreed a deal to relax trade restrictions on environmentally friendly goods and services.

The agreement was made at a meeting in Hawaii of the APEC countries, which includes China, Mexico, Japan and the US.

The Obama administration had been pushing for a “green growth” commitment ahead of the summit. It is the second announcement in as many weeks to please US environmentalists following the delayed decision on the Keystone XL pipeline project.

There may now be renewed cause for optimism on the American line as the UNFCCC climate talks in Durban draw near.

“Global trends and world events have given us a full and formidable agenda, and the stakes are high for all of us,” said US Secretary of State Hilary Rodham Clinton.

“We are each trying to generate balanced, inclusive, sustainable growth that delivers good jobs for our citizens, economic, social, and environmental progress for our nations and shared prosperity for this region.”

The green trade move is at an early stage and has now been forwarded for further consideration.

It was one of several climate change related declarations made at the summit.

Despite concern from China, host the US was able to push through a deal on solar technology that will see interoperable standards developed in the industry. China and the US have recently been involved in a trade dispute regarding solar imports to the States.

“We should strike a balance between economic and social development and environmental protection, achieve sustainable development in resources and the environment, and maintain sustainability in fiscal, monetary, trade and industrial policies,” said Chinese President Hu Jintao.

There will also be standardisation of smart grid technologies to enable collaboration and improved clarity of green building regulations to improve transparency.