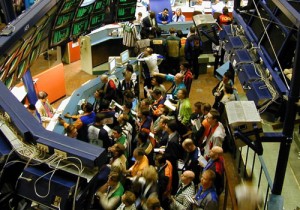 Carbon trading will be high on the agenda at the COP17 talks in Durban despite attracting its share of controversy in recent years.

Putting a price on carbon makes heavy emitting industries thriftier with their waste and energy use. It helps compensate low emitters financially and it can help put in place programmes to reduce and remove carbon in the long-term.

In the developed world it is framed by opponents as a punitive tax on industry. A study by Stanford University estimated that a third to two thirds of all carbon credits fail to result in an emission reduction.

What is emissions trading?

One of the fundamental products of the 1997 Kyoto protocol was the development of emissions trading schemes.

Under the agreement, countries are assigned an “allowed amount” of emissions for the commitment period of 2008-2012.

These allowances are broken down at a domestic level and assigned to heavy emitting industrial installations and companies. Efficient firms using less than their allowance can sell the excess to another firm.

What exactly is traded?

Carbon is traded in much the same way as other commodities with one unit of carbon equalling a tonne of CO2 emissions.

As well as trading units related to emissions, other units can also be traded.

A removal unit (RMU) relates to carbon that is sequestered via a land use change such as reforestation.

An emission reduction unit (ERU) is generated via the so called Joint Implementation (JI) mechanism. This means a Kyoto Annex B country (developed) with Kyoto emission commitments, can work with another Annex B country on a project to enhance the reduction of emissions or the removal of carbon from the atmosphere through a carbon sink. In an example scheme, Germany worked with Russia to improve the efficiency of a gas power plant. The emissions per MW of energy produced was lowered. In excess of one million tonnes of CO2 are expected to be saved, Germany will receive extra credits (emissions) as a result.

A third mechanism is perhaps the most widely known and the most controversial. The Clean Development Mechanism (CDM) involves developed countries working with developing nations. By working together to lower emissions in emerging economies or by locking more carbon into long term stores, countries can earn extra credits.

JI and CDM projects both depend on the key proviso that the emissions saved, are additional to what would have occurred without the project’s intervention.

Is anyone trading yet?

One tonne of CO2 in the ETS equals one EU allowance (EUA) which were allocated to member states. Each country then allocated these to high emitting installations in the country. The scheme covers electricity generation, the iron and steel industries, mineral processing (chiefly cement manufacture) and pulp and paper mills. Ten per cent of EUA are sold by auction instead of being allocated.

Each year the participating installations declare their emissions and can buy EUAs or sell their surplus allowance. This incentivises the participants to reduce emissions.

State-wide climate exchanges in the US suffered setbacks in 2010, however the design of a Californian trading system was approved in October 2011.

China has also experimented with a pilot carbon trading scheme while South Korea, Taiwan, India and a collective of western US and Canadian provinces are in development.