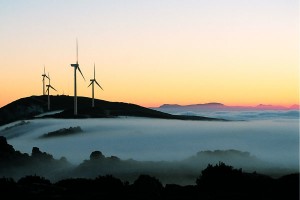 A farm of Vestas turbines in Portugal (Source: Vestas)

The average onshore wind farm will be capable of producing electricity as efficiently as nuclear, coal and gas generators by 2016, according to a new report by Bloomberg New Energy Finance.

The study found that the cost of electricity from onshore wind will drop by 12% thanks to a combination of improving efficiency in generation, and the lowering cost of construction and maintenance.

The report estimates the total installed capacity of onshore wind in 1984 at 0.3GW compared to 240GW by the end of 2011. For each doubling of this initial capacity, the costs associated have fallen by 7%.

“The public perception of wind power tends to be that it is environmentally-friendly, but expensive and intermittent,” said Justin Wu, lead wind analyst, Bloomberg New Energy Finance. “That is out-of-date in the best locations, where generation is already cost-competitive with fossil fuel electricity, and that will be the case for the majority of new onshore turbines installed worldwide by 2016.”

According to the report the cost per MW of onshore electricity has fallen from €2 million to €880,000 between 1984 and today.

Onshore wind has long been the victim of stringent planning applications that have impeded its growth. In recent years, offshore wind has received more attention, particularly in northern Europe.

There is increasing scrutiny on renewable energy sources as governments look for the most economical way to hit existing targets and evaluate any future commitments as the COP17 talks in Durban approach.