The Rainbow Warrior III – labelled the world’s most environmentally friendly ship – docked in London this weekend (12-13 Nov) and was visited by 9000 Greenpeace supporters and donors; a reminder that “you can’t sink a Rainbow”.

First coined by a supporter in Auckland back in 1985, when the Rainbow Warrior I was sunk by the French secret service, the phrase soon became as iconic in the Greenpeace movement as the ship herself.

On July 10 1985, Rainbow Warrior I was docked in Auckland, New Zealand – preparing for a visit to Moruroa Atoll as part of a campaign against French nuclear testing.  Just before midnight two bombs exploded, killing Greenpeace photographer Fernando Pereira.

While initially denying involvement, the French government soon admitted the explosion was the work of the French secret service and two agents were jailed. 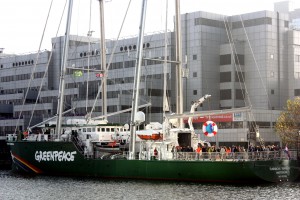 As the third ship takes the name – the first purpose built Greenpeace boat – the legacy continues. Taking over from the Rainbow Warrior II – now a hospital ship in Bangladesh – the $23 million, crowd funded boat was made possible through over 100,000 donations from supporters.

All Greenpeace offices around the world contributed towards the cost, and in the UK £500,000 was raised.

John Sauven, UK Director of Greenpeace said: “The Rainbow Warrior represents so many things about hope; about the future; about generations to come that we want to leave in a better place than exists at the moment.”

With a Class Notion from the Green Ships Project and a “Green Passport” for recycling under the IMO – fulfilling the highest green standards – the Rainbow Warrior’s five 53 foot masts offer 1200 sq metres of sails, which will power the ship the majority of the time.

The ship also has an electric and a diesel engine to pick up the slack in rough weather or when speed is needed to catch-up with the “bad guys” as some of Greenpeace’s targets were described by the ship’s tour guides.

Some of the Rainbow Warrior’s previous voyages have included sailing against whaling, sailing up the Amazon in protest of deforestation, relocating the population of a South Pacific Island contaminated by radiation and providing disaster relief to victims of the 2004 Tsunami in South East Asia.

The design of the Warrior III means it should run only 10% of its lifetime on the engines and the rest of its life through the sails, something the ship’s crew already believe will be easily achievable.

After sailing for a full 24 hours on wind power alone the ship made such good time, that they arrived in London much earlier than expected and had to drop anchor for the evening. 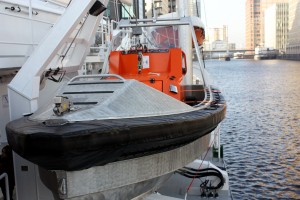 Smaller ships can be launched within five minutes

Pablo Bullrich, deckhand on the Rainbow Warrior from Greenpeace Argentina said travelling by sails gives the boat and the crew “a strong connection with nature”.

While the ship can travel at around 16 Knots, where needed smaller inflatable boats stored aboard the vessel – seating two crew – can be deployed into action within five minutes and can run for five hours by battery.

These boats are not the only mod-cons built into the new design. A large campaign room – fitted with internet access and video conferencing – a radio studio, an editing suite and a room for press and educational events, means Greenpeace can now run a campaign from the ocean.

Meanwhile life at sea – with the boat sleeping 30 people for four week periods  – is made a little more homely with the comforts of a large mess room, social spaces and cabins each with their own shower. 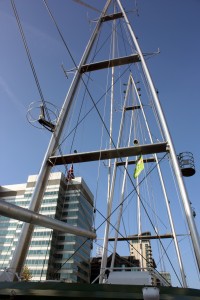 The ships masts are over 50 ft tall

A waste water treatment centre, and heat from the engine and generators recycled to warm cabins and water adds to the boat’s green credentials.

While previous Rainbow Warriors have been converted from old fishing vessels, the decision to purpose build the third ship meant it could be designed with campaigning and efficiency in mind – with all the new features this needed.

For example, one of the most impressive features of the ship, the helicopter pad and hanger, would not have been possible had the ship not been designed to accomodate the space this needed.

And the ship’s smart use of space means no area is wasted. The engine room doubles up as the water treatment centre, and running alongside the control room are the containers storing the sails and running cable up to the ships satellite system.

The Rainbow Warrior has historically been at the heart of Greenpeace’s most iconic battles – including nuclear testing and whaling – and with the new versatile boat equipped for most weather conditions save heavy ice, the crew believe the new Warrior will take on the role with ease.

The next ports of call for Rainbow Warrior III are Stockholm, Barcelona before she heads out to take on war, global warming, and other environmental crimes across the oceans.