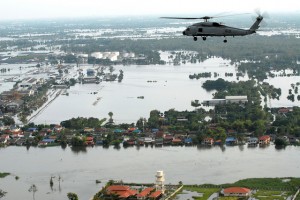 The link between climate change and extreme weather has been highlighted by the World Bank after officials warned of more floods similar to those currently seen in Thailand.

Speaking to AFP, Andrew Steer, the World Bank’s special envoy for climate change said: “What we are seeing is there are more floods, more extreme weather events, higher temperatures, more variable rainfalls and we believe that is caused by climate change. And we should expect this to increase.”

This warning comes ahead of the UNFCCC Climate Summit in Durban, where adaptation and the implementation of a Green Climate Fund to help developing nations already feeling the effects of climate change, will be central to the discussions.

Across Southeast Asia, flooding continues to cause havoc. In Thailand over 500 people have now been killed by the floods and this week more people in the country’s capital are being urged to evacuate.

Thailand’s Prime Minister Yingluck Shinawatra has said she plans to set aside more than £3 billion (£1.9 billion) for post-flood reconstruction.

And flooding is hitting communities’ right along the Mekong River, with over 200 people killed in Cambodia and more than 100 people in Vietnam. Following an emergency appeal the Red Cross and the Red Crescent say they have now raised more than $2 million in aid for victims.

The United Nations has called for a further $10 million in aid for flood victims in Vietnam.

Steer who had to cancel plans to visit Thailand because of the disaster, spoke from Vietnam, saying the floods there were “consistent with what we know to be true about climate change.”