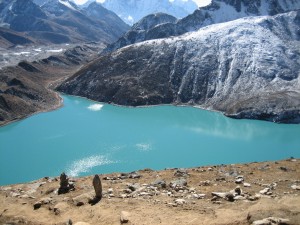 View of Gokyo Lakes and Nguzumpa glacier in Nepal

The Himalayas region in Central Asia is the largest glacier area outside of the polar caps – home to one sixth of all glacier and ice caps in the world.

Previous research from the IPCC predicted the entire region could melt by 2035, gaining widespread attention. While they later admitted the claim was a mistake and it has now been widely dismissed, the threat to the Himalayas from climate change remains.

Dr Arun Shrestha, climate change expert from the International Centre for Integrated Mountain Development in Kathmandu said: “It is not a situation as alarming as has sometimes been reported. The Himalayas are not going to disappear because they are so big; even in the worst case scenario. That does not mean the glaciers aren’t shrinking. They are shrinking, especially in the eastern part of the Himalayas.”

One dangerous consequence of this glacier melt is the formation of glacier lakes. While these occur naturally, forming wherever glaciers are found, in the Eastern Himalayas a significant increase in the size and frequency of these lakes has recently been detected.

And while not all formations pose a threat to local communities, unstable lakes can burst and, in Nepal, 14 Glacier Lake Outburst Floods (GLOF) events have been recorded in the last 50 years.

With some lakes exceeding 2 km and with depths reaching 100m, these lakes often hold immense amounts of water behind potentially unstable damns.

Dr Michael Zemp, Director of the World Glacier Monitoring Service at Zurich University said: “There are hundreds and thousand of lakes there and it is a really difficult task to detect those lakes which really pose a danger.”

Whether the lake is exposed to landslide events, whether their damns are stable enough and whether anybody lives downstream of the lakes, can all effect the danger they may pose.

In the Central Nepal Himalayas, for example, the Tsho Rolpa is the largest moraine damned lake in the region. It has been increasing in size rapidly since the 1950s and in 2009 the lake was measured at 1.54 km2 with a maximum depth of 133.5 metres. 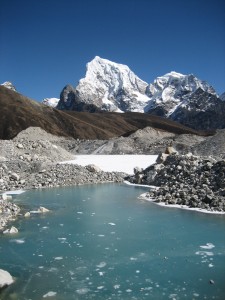 The Nguzumpa glacier is the largest in the Himalaya

In August 1985, 20 people were killed in an outburst flood from the Dig Tsho glacial lake in Nepal. The burst caused extensive damage downstream, and destroyed the nearly completed hydro-power planet – the Namche Small Hyrdel Project.

In 1997, after a GLOF specialist found the lake to be at dangerous levels, an advanced warning system was installed to protect the communities living near the lake and the lake level was lowered by draining out part of its water through an artificially dug canal.

Costing around $4 million – paid for by the Nepalese government and the World Bank – the system saw mixed success. While the lowering of the lake was seen as a huge triumph, with the canal still fully functional today, a communication gap between experts and local communities meant the early warning system is considered less of a success.

Now other lakes in the region are seen to pose a threat – most notably the Imja Tsho Lake. Made up of a series of supra-glacial melt water ponds, this lake has also seen an increase over the last 50 to 60 years.

The lake now measures more then 2 to 3 km long, and has maximum depth of close to 100 metres. Options for lowering this lake are being considered and as the world continues to warm, Dr Zemp says it “looks like it is a phenomenon which is increasing with the shrinking of the glaciers.”

Ahead of UNFCCC Conference Dr Shrestha stresses the need for a global agreement on lowering emissions to protect the future for the Himalayas, says that the most important element of any agreement will have to be help for communities to adapt to the changes which it is too late to stop.

He said: “Without global cooperation this problem can not be solved. Greenhouse gases have a long life and even if we cut emissions the greenhouse gas effect will not be reduced immediately.