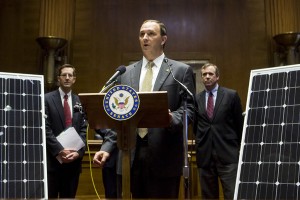 China has responded angrily to a US investigation into alleged dumping of cheap solar panels, saying progress in international climate negotiations could be hindered as a result.

Responding to complaints from a consortium of American manufacturers, the US Department of Commerce will look into the appearance of Chinese panels priced below the cost of manufacture. It will also look at whether Chinese government subsidies have breached World Trade Organisation rules.

The Chinese Ministry of Commerce released a statement saying the probe threatens the chances of international cooperation between the two countries.

“The probe could damage energy cooperation between the two countries and impede the progress of global efforts to deal with climate change,” said ShenDanyang, a Ministry of Commerce spokesman on its website, according to the Xinhua News Agency.

“Chinese people and enterprises are greatly dissatisfied about US attempts to blame Chinese exports for the country’s sluggish development,” said Shen.

The US market has welcomed the probe.

“China’s plans for the US market have been clear from its excessive and illegal subsidization of its export-heavy industry, its ever-escalating drive to dump product at artificially low prices on the US marketplace,” said Gordon Brinser, president SolarWorld Industries, the manufacturers that led the group of complainants.

“The anti-competitive tactics of Chinese exporters have threatened to wipe out US producers and jobs,” said Brinser. “Domestic producers look forward to returning to steady increases in efficiency and sustainable decreases in pricing that directly result from legal international competition.”

The disagreement is one of a number of trade disputes between China and the West. The Chinese Ministry of Commerce press site lists responses to disagreements over a diverse range of goods from diamond drill bits, paper and X-ray equipment.