Feeding the world by 2050 will mean limiting demand 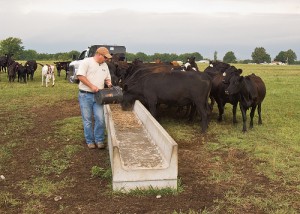 (Source: US Department of Agriculture)

Tackling demand will be as vital as supply in feeding the growing population in a resource strapped world in 2050, according to the Soil Association’s Policy Director.

Speaking to the Environmental Audit Committee Peter Melchett said: “It’s clear to me that we can not possibly feed everyone on the planet by 2050 if meat consumption – and particularly white meat fed with protein and grain – continues to increase.

“If we are going to have to cut greenhouse gas emissions from farming by 80% – and we are going to live in a world where there are major constraints on the availability of manufactured fertiliser and mineral phosphates – we clearly need to change demand as well as supply.”

He also believes that to fully deal with the problem this must be considered in a global context. While in Africa, South East Asia and other developing regions, producing more food to feed the population remains vital, in North Europe and North America there is a different problem – diet related health issues.

Last year in the UK ill health related to obesity and poor diet cost the health service an estimated £6 billion and the UK economy £25 billion.

Melchett also stressed that if the US and North America continued to produce more food – heavily subsidised by initiatives like the UK’s Common Agricultural Policy – and then exported it, farmers in the developing world would suffer.

Professor Ian Crute, Chief Scientist at the Agriculture and Horticulture Development Board, however, believes we must continue to have lots of “bread baskets” protecting the market from the impact of crops failures – something predicted to worsen as the world continues to warm.

For him feeding the growing population – particularly as more people around the world move to urban areas away from farming – means making the most out of the land we have.

He said the goal was: “To farm productively on the smallest footprint of land that delivers what the market wants – and that is a market driven outcome – or if you are a subsistence farmer, what your family actually needs is the greenest and usually the profitable way to farm.

“And why is that? It’s very obvious because we need land for all other sorts of purposes, not least carbon sinks.”

In 2005, the IPCC estimated that around 12% of global greenhouse gas emissions came from the agriculture sector. However, Crute says that only 4% of this is through the direct actions of farmers – the use of nitrogen based fertilisers etc – all of which could potentially be replaced with renewables.

Food security will form a cornerstone of the UN Rio+20 Conference on Sustainable Development and is a priority for African nations going into the COP17 talks in Durban.

A larger problem in the farming sector is the production of methane and nitrous oxide from rearing livestock, and while experiments have been taking place for sometime testing how different diets could limit these emissions, Crute warns that there “will be an irreducible minimum greenhouse gas level from agricultural systems”.

He said globally countries must look for the trade-offs in the agricultural sector: “Can we balance this with carbon capture through grasslands and forestry? If we can should we be importing food from parts of the world that are as efficient as we are so we can actually keep more grassland or plant more trees or should we be in the situation where we effectively pay for the planting of trees elsewhere?”