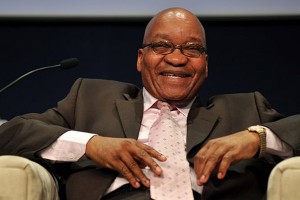 Will President Zuma be all smiles after COP17? (Source: WEF/Eric Miller)

South Africa may seem an unlikely venue for climate change talks given that it depends more on coal for electricity generation (93 per cent) than any other country in the world, according to the World Coal Association.

A two hour drive from Durban is Richards Bay harbour, the largest coal export terminal in the world, which has a capacity of 91 million tonnes a year.

The country is currently preparing to host the next round of UNFCCC climate talks in Durban. On the one hand it is arguably the most powerful representative voice on the African continent and an influential ambassador for the developing world.

Are these responsibilities compromised by its heavy industries and if it rallies too hard for commitment on emissions, could its own economy suffer?

South Africa’s own National Climate Change Response document, published following its approval by government one month prior to the talks in Durban, may hold some clues to how it will seek to influence COP17.

The document says the country is willing to “contribute its fair share” of emissions reductions with a goal of restricting warming to no more than 2C, rather than the 1.5C target advocated by UNFCCC chief Christiana Figueres.

“On the one hand, as the president they will want to be associated historically with a productive COP in terms of addressing climate change. But strategically, South Africa doesn’t really want a very ambitious COP in the sense that it would then be forced to undertake strong mitigation measures,” says Dr Chukwumerije Okereke, Director of Research on African Environment and Development at Reading University. “This is not a personal issue for President Zuma. Whether COP17 succeeds or fails will not have any serious consequences for his reputation.”

Coming into any climate talks, the country is in a unique position. This is more so the case as it prepares for talks on home turf.

“At a strategic level South Africa has an important role globally. As part of BRIC it can its play part and it is also uniquely positioned to play an important role on behalf of Africa,” says Okereke. “There is no other country in the world that has this influence these on three unique levels.

“Developing countries, particularly in Africa, have been sidelined in the negotiations. They are struggling to be relevant and have not taken the initiative to steer debate in a way that will set the agenda.

In terms of its overall approach to the discussions, the South Africa’s climate response document would suggest a strategy in line with Okereke’s predictions.

The report states that internationally, South Africa will “engage vigorously in the multilateral climate change negotiations, to ensure a fair and effective outcome that…provides developing countries with sufficient time and development space for the required economic transition to lower carbon economies”.

This statement is followed up with the countries domestic targets for the talks, all of which are economic and include to “effectively manage and reduce the economic risks”.

The South African Chamber of Mines and Petrochemicals (SASOL) has already voiced concerns on behalf of the industry.

“The Department of Environmental Affairs has gone back on its word and has included numbers that are still in discussion. Our primary concern is centered around the introduction of fixed numbers for the PPD (peak-plateau-decline), which fundamentally changes the way in which climate change policy will be implemented nationally, and is also likely to negatively impact the international negotiations,” it said.

On a positive note, Okereke echoes one sentiment from the South African agenda that is likely to dominate COP17.

“African and developing countries haven’t given up on Kyoto and will not until the very last minute. There is still a slight chance that Kyoto will be salvaged, perhaps not in it entirety but in one way or another,” says Okereke.

So does he think African countries would back the proposals of Australia and Norway that would see a hiatus from Kyoto, while a new protocol was developed or is that simply too unambitious?

“It’s not unambitious. Personally, I think that’s what should happen. The best strategy might well be just to gain more time to negotiate, rather than kill Kyoto completely,” says Okereke.

South Africa will be keen to take a leadership role during the talks and raise its international profile. However, with coal representing 13 per cent of the country’s exports, and a near total reliance on coal for power generation, successful talks could extinguish and already stifled economy.