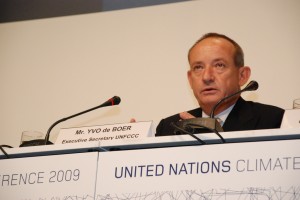 With COP17 in Durban fast approaching, the future of the most iconic piece of climate legislation hangs in the balance.

Since its inception in 1997, and the start of its first commitment period in 2005, the Kyoto Protocol has divided opinion in a way few other treaties have managed.

As the end of Kyoto’s first commitment period draws near, negotiations are continuing over a replacement. For supporters it is an essential piece of the architecture of global climate governance. For others it is a distraction from other policies that could achieve more, and potentially cost less.

That 192 signed the Protocol is some achievement – yet the absence of the USA remains a major stain, as does its apparent inability to curb a global rise in emissions.

What is the Kyoto Protocol?
The Protocol is a treaty that commits certain parties to binding carbon emission reductions over the period 2008-2012. It was adopted by the UNFCCC in 1997 and came into force in 2005. It is currently ratified by 192 countries worldwide.

How does it work?
States who have signed up to the Protocol are divided into a variety of categories. Annex I parties are developed countries who commit to reducing their carbon emissions by agreed levels, measured against a base year of 1990. These commitments are legally binding. Developing states are listed as non-Annex I parties, and have no legal requirement to reduce their emissions.

Annex I and non-Annex I parties are expected to cooperate to reduce emissions through three key Kyoto mechanisms:

Who is involved?
192 states have ratified the Kyoto Protocol, including the EU, China, India, Russia and Brazil. Australia initially declined to sign the treaty but incoming Prime Minister Kevin Rudd ratified the Protocol in 2007. The US is an exception, with President George W Bush withdrawing from the process in 2001, acknowledging at the time his decision was based on ‘economic’ concerns.

Annex I countries include the EU and other ‘developed’ regions. Non-Annex I parties include China, India, Indonesia and Brazil. The UNFCCC website has a full list of all members.

Does it work?
Opinion is divided over Kyoto’s effectiveness. Its existence has clearly focused the minds of the world on one of the major challenges the world faces – climate change. We have seen clear frameworks and targets emerge from the Protocol, together with commitments from the developed world to aid the developing world in producing low-carbon technology.

Yet the brutal fact is that despite a major recession, carbon emissions around the world are still rising. Major emitters such as the USA, China and India are either not signed up or exempt from binding targets. Added to that is the fact that even if every state in the world hit its commitments, on current form it would not be enough to prevent the world’s surface temperature rising 2C above pre-industrial levels.