G20 commits to Green Climate Fund but no mention of Kyoto 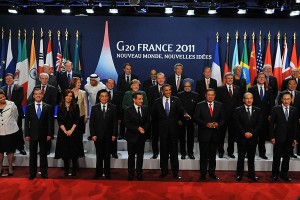 The leaders of the G20 group of nations have re-affirmed their commitment to the Green Climate Fund (GCF) but failed to make any other targets for the upcoming UNFCCC climate talks in Durban.

In the Final Communique released at the end of last week’s talks in Cannes the G20, which includes Britain, France, US, South Africa, Saudi Arabia and China, dedicated just two paragraphs to energy and climate change.

The future of the Kyoto Protocol, perhaps the most controversial aspect of COP17 in Durban, does not feature. While the EU backs an extension of the protocol, G20 members Canada, Japan and Russia are openly opposed.

The communique does call for the “implementation of the Cancun agreements and further progress in all areas of negotiation, including the operationalization of the Green Climate Fund, as part of a balanced outcome in Durban”.

On energy, the statement calls for the “phase-out over the medium term inefficient fossil fuel subsidies that encourage wasteful consumption, while providing targeted support for the poorest”.

The statement has done little to appease the concerns of those monitoring progress in the build-up to COP17.

“The leaders of the most powerful economies on earth may see themselves as pursuing the fight against climate change, but really they’re just fiddling around the edges while the planet heats up,” said Janet Redman, co-director, sustainable energy and economy network, Institute for Policy Studies.

“A successful outcome in Durban depends as much on the survival of the Kyoto Protocol – the only global treaty regulating greenhouse gas emissions – as on the delivery of finance for adaptation to climate change and low-carbon growth in developing countries. Support for binding cuts to climate pollution is nowhere to be seen in the G20’s final declaration.”

Meanwhile the WWF welcomed the small steps taken by the G20 but called for far larger actions at COP17 in Durban.

“There is still much to be done. WWF will keep pressing G20 governments to redirect fossil fuel subsidies towards renewable energy and energy access for all, and to quickly set-up innovative finance mechanisms in the lead-up to the climate summit in Durban and Rio+20 in 2012,” said Elise Buckle, WWF International G20 policy campaign leader.

Improving energy markets and pursuing the Fight against Climate Change

20. We are determined to enhance the functioning and transparency of energy markets. We commit to improve the timeliness, completeness and reliability of the JODI-oil database and to work on the JODI-gas database along the same principles. We call for continued dialogue annually between producers and consumers on short medium and long-term outlook and forecasts for oil, gas and coal. We ask relevant organizations to make recommendations on the functioning and oversight of price reporting agencies. We reaffirm our commitment to rationalise and phase-out over the medium term inefficient fossil fuel subsidies that encourage wasteful consumption, while providing targeted support for the poorest.

21. We are committed to the success of the upcoming Durban Conference on Climate Change and support South Africa as the incoming President of the Conference. We call for the implementation of the Cancun agreements and further progress in all areas of negotiation, including the operationalization of the Green Climate Fund, as part of a balanced outcome in Durban. We discussed the IFIs report on climate finance and asked our Finance Ministers to continue work in this field, taking into account the objectives, provisions and principles of the UNFCCC.