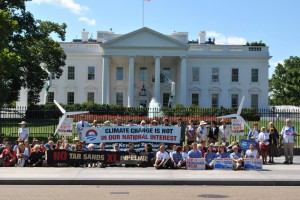 As many as 12,000 protesters encircled the Whitehouse on Sunday in objection to the Keystone XL oil pipeline project.

The pipeline would transport oil extracted from Canadian tar sands through the middle of the United States to refineries in Texas.

Supporters say the pipeline will create jobs and provide energy security. The opposition has concerns around the impact of the pipeline, the potential for spills and the environmental damage caused by the production of oil from tar sands.

“It is really about the larger issue, which is getting off oil all together,” Michael Brune, executive director of the Sierra Club, which organised the protests told Reuters.

The company behind the pipeline, Transcanada, claims that the infrastructure project would create 20,000 jobs, a statistic refuted by the protesters.

President Obama has stated that he will have the final decision on Keystone, a decision which could now be delayed until after the 2012 USelections according to a report in the LA Times.

The Obama administration may request further work to be carried out to reduce the project’s environmental impact before it will give its approval. This would delay any decision until after the election.

President Obama was not in the building during the protests, he was playing golf.