A Pakistani graduate in Petroleum Engineering has won the inaugural Climate Change TV award, picking up a prize of $5000.

Danish Khan, who attended NED University in Karachi, won the popular vote with his dystopian vision of life in the future, titled the ‘Gill Grown Family’.

RTCC runs Climate Change TV at all major UNFCCC conferences on behalf of the secretariat, interviewing key figures and promoting its work against climate change.

The competition was launched in the summer of 2011, and attracted hundreds of entries from Europe, the US, Africa and South East Asia.

The short film, which can be viewed above, takes inspiration from Kevin Costner’s 1995 epic ‘Waterworld’, which pictured a submerged planet and humans with gills.

Khan’s film envisages life in a world that is underwater after catastrophic melting of the ice-caps. 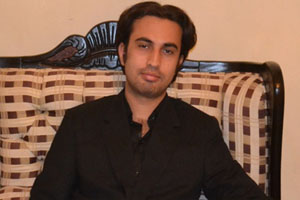 Danish Khan at home in Karachi

He beat off competition from two other strong contenders.

Amit Pudyal produced a haunting portrayal of the challenges facing Himalayan communities as glaciers melt, while the Indigeonous Youth Network provided a vibrant snapshot of their campaigns against climate change in South East Asia.

The student says he will put his hard-won prize money to pay for further education. RTCC caught up with him after the celebrations had died down, to find out what sparked his interest in climate change.

Why did you enter the competition?

The reason why I took part in the competition is my passion for making my wildest imagination come to life and this competition was a best opportunity for me to bring my imagination about climate change to life through video.

Secondly, I needed money to complete my higher education and in this regard winning $5000 was helpful in achieving my target.

Why is climate change important to you?

The issue of climate change has great importance in my life because I have been brought up in metropolitan city Karachi but my roots still lie in a village near mountainous area.

Whenever I go to visit my village I see the impact of climate change on the life of the people and agriculture in the form of floods, earthquakes and decreasing crop yields. This makes me anxious.

How has climate change affected Pakistan?

In the recent few years Pakistan has witnessed severe impacts of the climate change in the form of earthquake and the flood which has affected more than million people in Pakistan.

I have noticed that during past few years the severity and frequency of these events have increased drastically which is a sign of suspicion and alarm for my country.

How did you come up with your idea?

Well it is a very interesting story about the idea of the video that my mind is full of imagination. I have these strange ideas coming to my mind.

So I thought what if the all the ice in the world melts down and the world is full of water. So I presented a very serious topic with light humorous touch.

What reaction did you hope to get from people?

In the beginning I was a bit scared as it was an entirely new idea and I didn’t know if people would appreciate it.

When I discussed my video with my friends the found it interesting and when I told them that I won the completion I got mixed responses as some were surprised and others were happy!

When I told my Mom that I won the completion she was completely stunned for a few minutes.

I would like to thank Responding to Climate Change for organizing this competition and giving us a chance to unleash my imaginations about climate change – especially as now my dream of getting my Masters from abroad is fulfilled.