Iceberg the size of Berlin developing in Antarctica 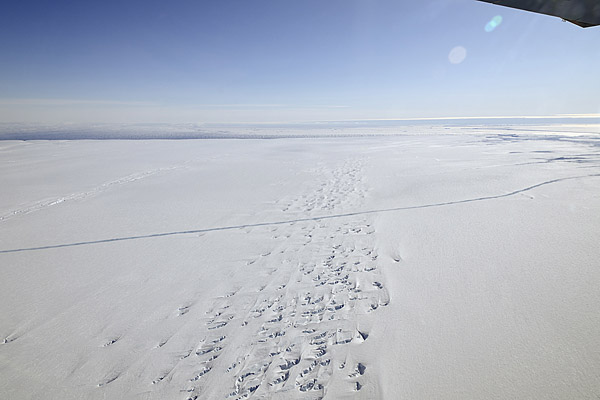 The crack in the Pine Island Glacier in Antarctica (Source: NASA/Michael Studinger)

An iceberg covering 880 square kilometres has been found in the Antarctic after scientists spotted a 20 mile long crack in the ice.

Experts from Nasa’s IceBridge Survey of the Poles found the crack in October and have been monitoring its growth since. The fracture is widening by two metres a day and is thought to be as much as 50m deep.

It will break away, or calve, from the Pine Island Glacier in Antarctica fully towards the end of 2011 or early 2012, when it is predicted to have grown to the same size as Berlin.

“It’s part of a natural cycle, but it’s still very interesting and impressive to see up close,” said IceBridge project scientist Michael Studinger. “It looks like a significant part of the ice shelf is ready to break off.”

Icebergs are formed as part of a natural process, which in this case Studinger has said is part of a 10-year major calving cycle. In 2000, an iceberg measuring 11,000 square kilometres broke free from the Ross ice shelf.

Climate change has been linked to increased melting of the ice sheets, however in the Antarctic, rising levels of precipitation have been found by some studies to be adding to the continent’s ice mass overall.

This can result in faster ice flows and increased calving.