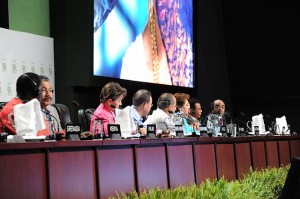 The EU is committed to its offer of extending its 2020 CO2 emissions targets to 30 per cent and will not be withdrawing the offer in Durban, a senior EU negotiator has said.

The deal, which depends on other countries making similar commitments, could signal a statement of intent from the EU as all parties begin to jostle for position in the build up to the talks.

“The question of whether the EU should relax its 30 per cent conditions is politically not on the cards at this point in time,” Artur Runge-Metzger, director of the international and climate strategy directorate at the EU Commission, told Reuters.

Speculation in recent weeks had suggested the US is unlikely to extend its own targets. China has responded by re-affirming its commitment to the bloc of developing countries and pointed the finger at the Americans for inspiring the inaction of other nations.

“Everyone is looking at the US and whether the US can also increase its level of ambition, but in Washington there is complete stalemate in terms of climate policies,” said Runge-Metzger.

“This has had a knock-on effect. Other big countries like China said it has already fulfilled what it promised in Cancun and it is for the others to get involved,” he added.