CCS can capture revenues as well as emissions 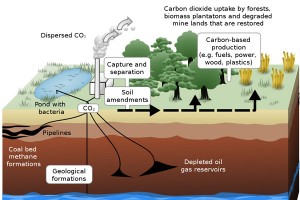 It was hailed as a silver bullet for carbon abatement, but commercial scale carbon capture projects continue to suffer misfires.

The UK’s Longannet project became the latest in a line of misadventures following on from high profile set backs in Germany, Finland, Australia and the US.

Much of the debate in individual domestic markets has focused on the contribution that CCS can make to each national carbon emissions reduction.

Yet there are a growing number of voices, notably the UK Secretary of State for Energy and Climate Change Chris Huhne, suggesting that the real prize of CCS will come in lowering the impact of developing countries and those relying heavily on coal.

He told a UK Parliament committee that: “having recently witnessed the scale of coal mining in China…it is absolutely essential that we get CCS on coal, even if we’re not using a lot of coal, other people will and we all share the same environment”.

Aside from altruistic motivations there is also a huge opportunity to export CCS technology to countries seeking to cut their carbon footprint without switching energy sources. The race is on to capture the international CCS market.

“Our stance has always been to support the CCS demonstration projects,” says Nick Molho, head of energy policy, WWF-UK. But for the UK we very much see it as a technology that should complement a system based on renewables rather than the other way around.”

“Given that the technology has not been proven yet and that Longannet has been withdrawn, it does mean that we should be cautious about being overly reliant on CCS for reducing emissions in the UK.”

Under a renewables-heavy scenario, CCS could have more economic benefits for developed countries, through direct technology transfer.

“The UK has taken a lead and has abundant offshore storage potential,” Adam Dawson, CEO of the UK Department of Energy and Climate Change’s CCS group told an industry event earlier this year. “It would be criminal to waste this first mover advantage. The CCS industry could sustain a lot of jobs come 2030.”

Under a future international agreement on emission reductions, countries will be looking for the cheapest routes to carbon abatement. Supplying such a technology could prove highly lucrative.

“Our recent work shows that the cost of mitigating, or avoiding, CO2 emissions for a coal power plant fitted with CCS technology ranges from US$23-92 per tonne of CO2,” says Brad Page, CEO, Global CCS Institute. “This is compared to an avoided CO2 cost of US$90-176/tonne for offshore wind, US$139-201/tonne for solar thermal and even more for solar PV.”

At these levels, CCS is already beginning to look economically competitive.

But how real is the UK’s advantage?

Despite the collapse of the Longannet scheme, DECC insists that real R&D progress was made via the doomed project. The UK’s big selling point is the number of depleted oil and gas fields at its disposal, a situation that could see the UK develop as a European CCS hub, according to Scottish Enterprise and other industry bodies.

The UK’s industrial and technological experience gained in the oil and gas sector also hands it a valuable advantage when attempting to break into overseas markets.

The Chinese are capable of developing CCS for themselves of course. According to two data sets from the CCS Global Institute and from the Scottish Carbon Capture Storage organisation, the UK and China have a comparable number of projects under development.

In reality, the Chinese figure is likely to be underestimated. Both sources list only two projects in South America and Africa combined. It is here that opportunities could lie for European and US based CCS developers.

With European demonstration plants working to a 2016 deadline for the EU CCS competition, the race is on for them to perfect their smokeless gun.