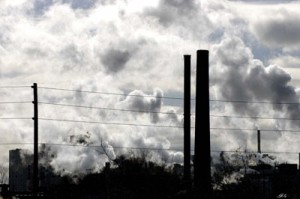 Fresh calls for tighter emissions targets are likely ahead of COP17 in Durban after US Department for Energy data revealed the global output of carbon dioxide soared in 2010.

New figures released by the US DOE suggest that levels of greenhouse gases are higher than worst case scenarios outlined by the Intergovernmental Panel on Climate Change four years ago.

The 2007 report by the IPCC used different scenarios for carbon dioxide pollution, rating the rate of warmed based on the rate of pollution.

The new figures put global emissions higher than the worst case projection from the panel, which forecasts tempurature increases of between 2.4°C and 6.4°C by the end of the century.

Tom Boden, director of the energy department’s Carbon Dioxide Information Analysis Center told the Associated Press: “It’s a big jump. From an emissions standpoint, the global financial crisis seems to be over.”

According to Boden, in 2010 people were travelling more and manufacturing was back up worldwide, meaning an increase in the use of fossil fuels. The world emitted around 512 million metric tonnes more of carbon in 2010 than in 2009, an increase of 6 per cent.

This represents a total only slightly lower than the individual emissions of China, India or the US.

The latest research poses questions ahead of the forthcoming COP 17 climate conference in Durban.

Andrew Weaver from the University of Victoria told AP that one consolation was that those countries who ratified the Kyoto Protocol have reduced their overall emissions.

Weaver says the developing world must now be tackled in order to prevent the problems from “running away from us.”

This puts further pressure on a global climate deal to succeed Kyoto to include big emitters including the US, China and India.

Earlier in the year, figures released by the International Energy Agency found a similar trend in global emissions. Their study found that carbon emissions from energy generation were up five per cent from the previous 2008 record after a dip during the financial crisis in 2009.

Both studies point towards China and India as being responsible for most of the rise in emissions, and raise doubts over whether curbs in emissions can be achieved.