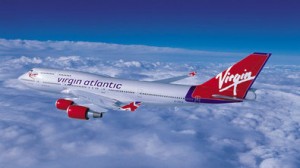 Virgin Atlantic’s new greener fuel could “turn aviation from a dirty industry to one of the cleanest”, says Sir Richard Branson.

Branson said this new fuel, developed in partnership with Lanzatech, was a “major breakthrough in the war on carbon,” with the potential to halve the emissions from flights.

The new fuel will be produced by taking waste gases from industrial steel production that is captured, fermented and chemically converted using technology developed by Swedish Biofuels.

Speaking at the partnership announcement, Dr Jennifer Holmgren, Chief Executive of LanzaTech said: “This technology will enable airlines to dramatically reduce their carbon footprint by reusing gases that would otherwise have been emitted directly into the atmosphere.

The announcement received a mixed response from green groups. Friends of the Earth’s Richard Dyer said: “A genuinely lower carbon aviation fuel would be a useful development and Virgin’s new venture may offer some merit – but even if it works, it will still cause emissions and it is unlikely to be ready to be used commercially for several years.

“To tackle climate change we need to curb the growth in aviation – through fair taxation and halting airport expansion, but also by developing practical green alternatives to flying such as faster, better rail services.”

Virgin Atlantic and Lanzatech – along with partners Swedish Biofuels and Boeing – say they aim to have flights from Shanghai and Delhi to London within three years – with the first demo flight expected by 2013.

The project, currently being piloted in New Zealand, with a larger facility planned for Shanghai this year, aims to have its first commercial operation facility in China in 2014. Following this, a wider-roll out could be seen, including operations in the UK.

The pilot will be overseen by the Roundtable for Sustainable Biofuels (RSB), an international body ensuring the sustainability of biofuels production – who will advise the team on meeting key environmental, social and economic criteria.

Virgin Atlantic, who trialled the first commercial biofuels using a mix of coconut oil and babassu oil back in 2008, have pledged to cut their emissions by 30 per cent per passenger km by 2020.