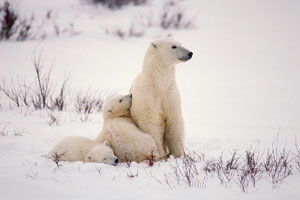 Animals and plant species around the world are shrinking due to the effects of climate change, say scientists from the National University of Singapore.

Raising global temperatures and drier weather patterns have already slowed the growth of some species, and further changes could mean more species are at risk.

With the UN estimating the Earth’s population set to hit 8-10 billion by 2050, the loss of key food sources, through stunted growth and possible extinctions, could mean feeding everyone will become increasingly difficult.

In a report published in Nature Climate Change, Jennifer A. Sheridan and David Bickford wrote: “The consequences of shrinkage are not yet fully understood, but could be far-reaching for biodiversity and humans alike.

“Although there will be adaptive responses that natural selection will favour, ecosystem services and global ecological processes will most likely be altered, but not in ways that will benefit human livelihoods.”

As some species shrink faster than others, food supplies are at risk, as primary consumers need larger quantities of plants and those higher in the food chain need more prey.

The problem will be further exacerbated as shrinking species will produce smaller and less young.

The report, published in Nature Climate Change; based its findings on a century of evidence which suggests species – including grasses and trees, red deer and Soay sheep – have already shrunk due to rising temperatures, while polar bears have also suffered stunted growth due to decreasing sea ice.

Cold blooded animals – which make up the majority of life on earth – are especially vulnerable to a warming climate.

Reptiles, tortoises and marine iguanas have also shown signs of getting smaller due to dryer conditions.

And some bird species have also shown signs of both mass and wing span decreasing.

The research found that for every degree of warming many plant types shrank between up to17 per cent, while the body size of some fish decreased by up to 22 per cent.