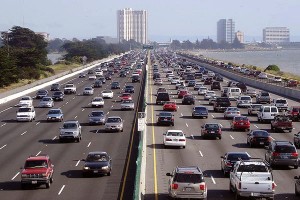 Not many people can find cause for optimism in rising temperatures, depleted water resources and increased flooding risk. UCLA economics professor, Matthew Kahn manages to do just that.

He tells RTCC how profit, opportunity and innovation will make us happier in a warmer world and defends his focus on adaptation versus mitigation.

Kahn has worked and written extensively on a range of subjects from energy efficiency, urban environmental economics and even the notion of an organic Egg McMuffin.

His latest book, Climatopolis, focuses on the relationship between capitalism and climate change and how the two will combine in our cities. In short, he believes that market forces will drive innovation and competition in adaptive solutions. Secondly, he is confident that prices will respond to the changing climate to an extent that alters our behaviour.

“Some of my critics have said that my focus on adaptation is dangerous,” says Kahn. “Environmental policy activists have attacked me and said that for me to even talk about the economics of adaptation is evil. Their argument is that even to begin to talk about adaptation will make moderates less in the mood for mitigation.”

That particular stance seems more than a little unfair, particularly when faced with the clarity of Kahn’s argument.

“We haven’t stepped up and done enough mitigation. So I have been looking at adaptation, how to make the best of a bad situation. It would of course be easier to adapt, if we mitigated now, but so far we haven’t.”

It is hard to argue with that. Kahn reels off examples of innovations that have sprouted from the anticipation of climate change and its effects. These range from engineering tools to maximise water supply and floating houses for flood areas and numerous clean energy projects.

He points out that the motivation for these might well be profit rather than altruism, but the end result is the same. In the book he uses the example of the pharmaceutical industry, which identifies and anticipates a new health threat and channels its research and development resources into it. Kahn says companies can do that now to exploit numerous opportunities such as finding cheaper air conditioning solutions and developing hydrogen fuel cells.

Away from business, he also looks at how cities might change physically, denser populations, more public transport and shifts in populations towards cooler coastal areas among anticipated changes. The current popularity of various cities could also rise and fall dramatically. A hotter, sprawling metropolis will not look be as attractive as a cooler, temperate city, compact enough for you to ditch your increasingly expensive car.

Kahn also looks at the role of the government, identifying the good and the bad effect it can have on response.

Governments have been shown to be a continued trusted source of information. Warnings issued by them tend t be heeded. However, Kahn believes that interference in insurance pricing, is preventing the industry from protecting citizens from parcels of land at risk from fire and flooding.

“When the US suffered natural disasters in the past, a lot of federal money went into disaster relief aid. How much of this aid encouraged people to live in that area? Perhaps you could protect the people of New Orleans better by not building a seawall around the city and ‘saying you’re your own’?. That would be a tough love approach but I think there’s interesting work to be done in looking at self protection and government protection,” says Kahn.

Away from insurance, pricing could also play a role in dealing with the Californian water shortage. According to Kahn, the price of the water in Los Angeles is less than half a cent per gallon. Allowing this figure to rise would signal the scarcity of the resource and encourage changes in people’s water usage. After all, as Kahn points out, there certainly are a lot of green spaces in California considering it’s a desert.

Ultimately, the argument boils down to assessing how people will balance the new costs of living, with their quality of life. This brings back the mitigation versus adaptation argument.

Climatopols: How are cities will thrive in the hotter future is available from Perseus Books.