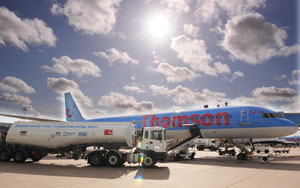 After delays due to safety clearance and testing, Thomson Airways, the airline business of TUI Travel, completed their first successful commercial flight powered with biofuels.

They hailed the four-hour journey between Birmingham and Arrecife Lanzarote as the first step towards reducing the emissions of the aviation industry, but green campaigners condemned the flight as a “hollow PR stunt”.

With Spanish airline Iberia launching their first commercial biofuel flight – between Madrid and Barcelona – in the same week, a shift towards the fuel seems to be building momentum.

Other airlines including Lufthansa, Finnair and Aeromexico have all piloted similar journeys this year.

While the Spanish airline chose a mix of conventional jet fuel and a fuel derived from the cameline sativa – an oilseed crop found in Northern Europe and Central Asia – for their flight, the Thomson flight took of from Birmingham powered by a mix of standard fuel and a biofuel make from waste cooking oil.

However, Thomson came into some criticism when the flight was labelled a “hallow PR stunt” by Friends of the Earth, who believe biofuels will not make flying green.

He also said it was not surprising the flight was delayed, as “it would take about a hundred years for each passenger to save up enough chip fat” for the flight.

Criticism of biofuels is not new. For some time now the production and use of such fuels has been condemned by green groups for not living up to the ‘green’ hype and being responsible for 69,000km2 of forests, grasslands and peat lands being lost to agricultural production of biofuels crops by 2020 – an area twice the size of Belgium.

While biofuels were once hailed as an environmental solution, there are now concerns that they may be unsustainable, leading to loss of biodiversity, exacerbating food security problems and could cause more climate-changing emissions than they save.

Earlier in the year the Nuffield Council on Bioethics released a report addressing these issues. They concluded that a comprehensive ethical standard should be developed for biofuels – with mandatory reporting – which ensures biofuels are not only environmentally sustainable and reduce greenhouse gases but also ensure human rights.

The fuel supplied to Thomson Airways by Dutch-based company SkyNRG, is advised by the Roundtable on Sustainable Biofuels – which in July 2011 became one of the first voluntary scheme to be approved by the European Commission.

Aviation is currently responsible for around two per cent of global emissions and is set to grow rapidly in coming years. For the EU to meet their 2050 targets of 80 per cent emissions reduction, oil consumption for transport – including aviation, shipping and road transport – needs to be reduced by 70 per cent.

While biofuels are not the only alternative fuels for airplanes, they are significantly further advanced than other fuel choices, and much nearer full scale commercial use.

Other alternative to conventional jet fuel include synthetics – kerosene made from coal, natural gas or other hydrocarbon resources turned into liquids – hydrogen and other gases, all of which would require new aircraft designs to make them possible.