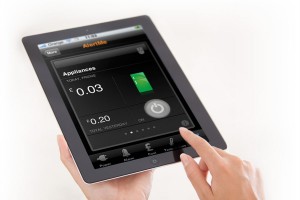 Households who use “smart home” technologies to regularly check their energy usage could save 17 per cent on their bills.

Smart home technologies allow an energy user to monitor and control their household appliances remotely via the internet or mobile phones.

A survey from UK price comparison site Uswitch.com found domestic energy deals rose by over £1000 a year for the first time. Alert Me – designers of the ‘SmartEnery’ smart home system – hope a simple interface, accessible anywhere, will help customers get to grips with their consumption.

Alert Me’s Jody Haskayne told RTCC: “Visibility anytime, anywhere is key. It allows people to interact with and understand how they use energy and then in turn change their behaviour.”

The theory is that by showing how much energy is costing, households will be more inclined to switch things off before leaving the house.

“When I first installed the system, my base load was around £600 for the year, that’s even when I wasn’t in the house, just from leaving things on. So just by turning all but the essentials off I was able to instantly get that down to £250.”

Using this technology means that forgetting to turn the heat down, or switching off the lights before leaving the house will no longer matter, as customers will be able to not only monitor but control their home from the office, a friend’s house or even from the bus.

Users simply log into their account online, check in on a smartphone App or send a text message to control their heat or switch off a forgotten appliance. And the new system will even send emails or text reminders when it registers an unwanted appliance as on.

While currently over 1000 customers are using Alert Me’s product, as British Gas – who owns a 20 per cent stake in the company – ready themselves for a trial of their customers, the system could soon hit the mass market in the UK.

Meanwhile a joint venture with Deutsche Telekom will take the products into Europe and Alert Me say they have plans to move into the US market soon.

They believe the product’s biggest advantage is its simplicity. The system can be self-installed with a clip around existing energy meters and a wireless monitor attached to an Internet router. The online interface provides options for all technological ability, offering detailed breakdowns of consumption.

The system will provide second by second data, not only on consumption, but cost breakdown, predictions for the following day, week, month and in some cases year. For the more environmentally conscious customers, the system will also track a house’s carbon footprint. 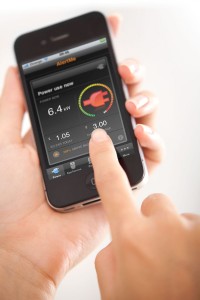 SmartEnergy for iPhone (Source: Alert Me)

The basic start up kit from SmartEnergy will currently set a customer back £49.99 for more in depth coverage; the price can start to increase.

For the SmartMonitoring interface, customers will pay a £4.99 monthly fee, along with £25 for each of the smart plugs that allow remote control to happen. And if you want to monitor and control heating, a professionally installed control box would be needed, costing another £100 to £150.

Current customers have reported a four to five month pay back period with the savings they made on their bills. And this is a saving the company hope to improve on – as technologies advance and more services can be added to the mix.

While lighting is currently not linked to the wireless system, future development would give customers even more control.

Meanwhile, as energy companies consider bringing in multiple tariffs the company hope their service will help customers understand when the best times to use appliances such as the washing machine – and even control it for them.