At a critical moment for Chinese leadership, Beijing’s “zero-Covid” policy is making it harder than ever for journalists and experts to access information 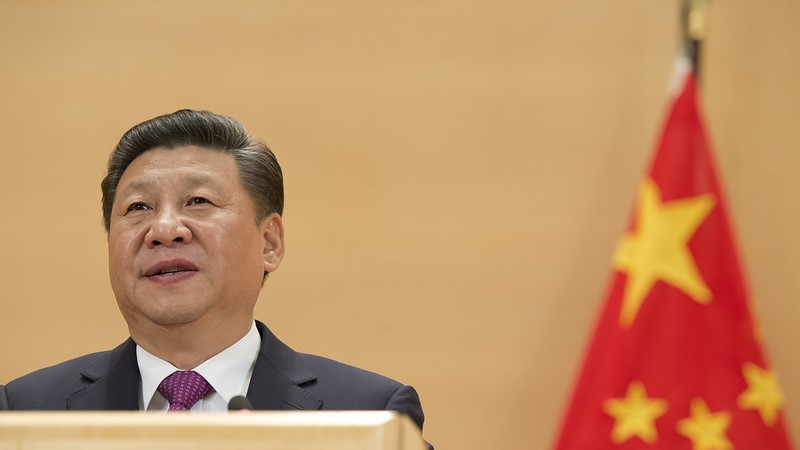 In the decade since Xi Jinping took power, China’s importance to the future of the climate, both as the world’s biggest emitter and as a clean technology powerhouse, has only grown.

At the same time, his government has clamped down on public debate and independent journalism.

As President Xi seeks a third term at this autumn’s Communist Party Congress, the space for dialogue on climate action is narrower than ever.

Climate Home News spoke with 11 journalists and experts on China’s climate and energy policies, both inside and outside the country, about the implications for the media and civil society. All agreed to talk on condition of anonymity – a symptom of how sensitive the issue has become.

They explained that tighter restrictions are leaving them dependent on the government’s narrative – making it harder than ever for the outside world to understand what is really going on in China.

China watchers told Climate Home of a relative “golden age” for reporting in the country over the period 2008-2012.

“Climate and environment was a permitted space for discussion in China, much more than other issues,” one China expert told Climate Home.

That space “started to shrink about 10 years ago” when President Xi came to power. Since then, the trend has been accelerating. And Covid-19 has made it worse.

Liu started on the environment beat in 2010 thinking it a “safe choice” compared to other topics. She left in 2014, citing dwindling environment coverage and an inhospitable environment.

That same year, China signed a deal with the US which paved the way for the Paris Agreement – the first global climate treaty – to be adopted a year later. During Barack Obama’s presidency, climate action was seen as a bright spot in otherwise tense Sino-American relations.

In 2016, Chinese officials took part in a G20 peer review of fossil fuel subsidies, opening up their policy calculations to international scrutiny.

In 2020, Xi told the UN general assembly in New York that China would peak its emissions this decade and achieve net zero emissions by 2060. If achieved, this could prevent 0.2-0.3C of global heating.

The introduction of legislation regulating international NGOs in 2016 was a turning point. Under the law, all international groups have to register with and be supervised by a government ministry.

Obtaining visas became increasingly difficult for foreign journalists and Chinese citizens were restricted from working as reporters for foreign media outlets. Those who do remain largely uncredited and take considerable risks.

At the end of 2020, Haze Fan, who worked for Bloomberg News’ bureau in Beijing, was detained on suspicion of endangering national security. She was reportedly released on bail last month.

Donald Trump’s arrival at the White House further soured US-China relations and journalists got caught in the crossfire. Trump limited the number of Chinese citizens who could work in the US for state-run Chinese news organisations and China expelled journalists working for the New York Times, the Washington Post and the Wall Street Journal.

Australian journalists joined the exodus after becoming embroiled in a national security case. And last year British journalist John Sudworth, of the BBC, left China after “an intensifying propaganda campaign targeting not just the BBC but me personally”.

Hong Kong, which had been a relatively safe place from which to report on mainland China, became less so with the introduction of a sweeping national security law in 2020. Sudworth moved to Taiwan.

China is expelling all American journalists w/the NYT, WSJ & WaPo — myself included. So many feelings, but I keep coming back to my last trip, to Wuhan, where ppl were so willing to talk - they wanted the world to know what was happening to them and to hold their govt accountable https://t.co/VQnKk6NITs

Covid restrictions have made things worse.

Accessing sources and verifying information has become increasingly difficult. Public conferences, which had been a vital source of information on the government’s climate policies and a meeting place for sources, are not happening.

Officials and policymakers are increasingly reluctant to talk to researchers and the media, even “off the record” or through informal channels. “We are left guessing and reading between the lines of policy documents,” one researcher told Climate Home.

Despite relatively low levels of infections in most places, Chinese residents are required to test every three days in a designated testing facility to enter any public space. A single person being in contact with someone with the virus is enough to cordon off an entire apartment block.

Freedom of movement is dictated by a colour system, or “health code”, on your phone. Green is a freedom pass. Red immediately bans you from all public venues and transport and may require spending weeks in a quarantine hotel.

Most sources say the restrictions are no longer just about public health, but about control.

In late May, hundreds of people travelled to banks in the city of Zhengzhou to protest being denied access to billions of yuan from their savings in a case of suspected financial fraud.

As protesters arrived in the city, those who had green health codes on departure found they had turned red and they were quarantined. The case received huge backlash online, leading to concerns it would undermine the credibility of the regime’s Covid policies. 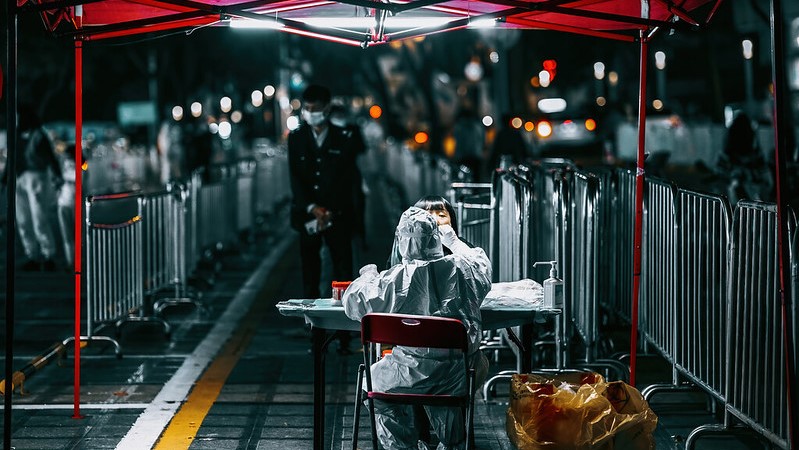 A woman being tested for Covid-19 in a city in China (Photo: QuantFoto/Flickr)

Among six China-based climate reporters Climate Home spoke to, four have left or are planning to leave the country – explaining that their work might as well be done from outside China.

One reporter described being “nervous” about staying in the country. “It’s a lot of stress financially and emotionally.”

A 2021 report by the Foreign Correspondents’ Club of China found that “the number of journalists forced out by the Chinese state [is] grow[ing] due to excessive intimidation or outright expulsions”.

“People like me have basically been forced to live in exile if we want to pursue our career of reporting on China as a journalist independently,” Jing Yang, who was born and raised in China and covers financial and business news for the Wall Street Journal from Hong Kong, recently told the Global Investigative Journalism Network.

But exile is no easy route. Sources told Climate Home that their contacts had started to go dry on them when they realised they were working for foreign outlets outside China.

Environment reporter Liu eventually left China to pursue other opportunities and returned to climate journalism in Europe for a year in 2021.

Despite identifying “a real appetite for credible, independent and fast-responding reporting on China's rapidly evolving energy and climate policy,” she described facing “structural discrimination” in newsrooms and complained that Chinese reporters were being “instrumentalised” – which did little to close the knowledge gap.

Pudong, Shanghai is on highest alert since lockdown eased on June 1. We have had 5 mandatory PCR tests in 6 days. After finish today’s test I was out to have a walk and passed a test station at a mall. This is the queuing line. pic.twitter.com/D9ZJED7jki

The Covid restrictions further mean few climate officials have been able to leave China over the past two and half years.

Scaled down delegations of climate and biodiversity negotiators have attended UN negotiations, at the cost of spending weeks in quarantine on their return.

Climate envoy Xie Zhenhua has taken just one trip out of China so far this year to attend meetings on the sidelines of the World Economic Forum in Davos, the G7 climate ministerial meeting in Berlin and the Ministerial on Climate Action in Stockholm.

“Only by cooperation can we find the solution,” Xie told political and business leaders in the Swiss resort.

But, according to one source, there are “fewer and fewer windows for China and the West to have a dialogue on climate change” and there is a risk of Beijing slipping “out of sight and out of mind”. “If you’re not there at the table, people tend to forget about you.”

In this vacuum, mistrust of China grows.

“We have seen a surge in misunderstanding and misinformation about China looking into the world and the world looking into China,” said Yang, of the Wall Street Journal.

Nuance is lost, the bureau chief of a major US outlet told the Foreign Correspondents’ Club of China. "Everything gets more black and white."

That’s “deeply unsatisfactory,” one non-Chinese source told Climate Home, because “China is the number one story when it comes to climate change”. 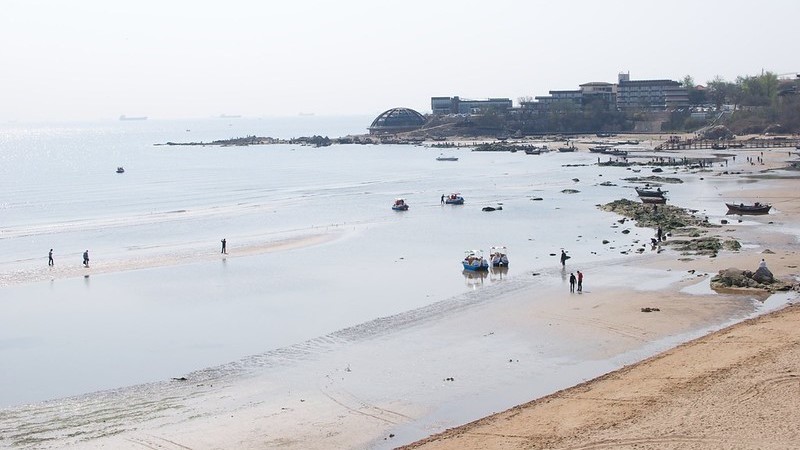 The coastal resort of Beidhaihe in China's Hebei province is due to host a summer retreat of top Chinese officials ahead of the 20th Communist Party Congress in the autumn (Photo: Autumn Park CNFlickr)

The coming months are critical for China's leadership.

The coastal town of Beidaihe, in China’s north-eastern Hebei province, is preparing to host a summer retreat of top Chinese officials to discuss the next political appointments.

Like much of China’s decision-making, the annual seaside gathering is veiled in secrecy and even the precise meeting dates are kept under wraps.

Tesla cars have been banned from the roads for the next two months as officials are leery their onboard cameras could be used by the US to spy on the event.

Then in autumn comes the Congress meeting at which Xi is widely expected to secure a third term. A two-term limit was scrapped in 2018, opening the door for Xi to keep power for life.

Other senior officials are vying for top positions in the Politburo – the Communist Party’s decision-making body.

Until they know where they stand, nobody wants to rock the boat. “It creates a huge amount of pressure on officials across the system, including down to local environmental bureaus: no-one wants to be seen to mess up,” one senior China watcher said.

Chinese officials continue to argue that Covid vaccine levels remain too low for the country to safely reopen and a major outbreak could overwhelm hospitals.

In the wake of a severe power crunch that gripped the country in 2021, Russia’s invasion of Ukraine and declining economic growth, security and stability have become the watchwords.

On climate and energy, that means shoring up power supplies. Despite a pledge to strictly control coal consumption until 2025, when it will be gradually phased down, China is increasing coal production to meet soaring electricity demand.

Meanwhile, Beijing is trying to incorporate climate action in its economic planning. Climate Home understands that the influential National Development and Reform Commission, which oversees strategic economic planning, is wrangling to take over the climate portfolio from the less powerful environment department.

Most of Chinese society can only watch and wait to see which way the political wind will blow. There is little hope for a return to openness any time soon.

“We are reversing back into a dark period of our politics,” said one Chinese source.

This article was updated after publication to clarify Hongqiao Liu's career path and the interpretation of her interview with the China Media Project.